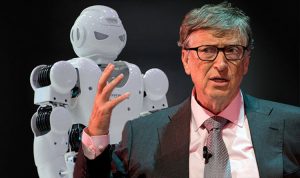 Entrepreneur and philanthropist Bill Gates again spoke about the potential dangers of artificial intelligence, calling this technology highly controversial and unpredictable. The 63-year-old billionaire visited Stanford University, where he took part in an AI conference.

During his speech, Gates compared intelligent machines with the energy of the atom, which gave mankind both cheap electricity and lethal weapons of mass destruction.

According to the businessman, artificial intelligence could be used everywhere in such areas as education and medicine, but in fact, scientists are actively introducing it into the military industry, wanting to get “smart” killer machines.

The American pays attention to artificial neural networks that imitate the work of the human brain and led to a real revolution in the technological sphere. Today, advanced neural networks are used, for example, for face recognition.

Thus, surveillance cameras at large Chinese railway stations successfully recognize each person and, identifying those who are wanted, immediately notify the police.

Technological giants like “Google” and “Facebook” actively use AI for data collection and analysis. Such methods are very opaque, and the largest high-tech companies are often criticized for spying on users and receiving their confidential information without permission.

Finally, as mentioned above, Gates is concerned about the weaponization of the United States, Russia, China and other countries.

According to the American media, the Pentagon annually allocates hundreds of millions of dollars to develop software that can independently manage military equipment.