The shock snap clicked from the air has caused a stir online, with many convinced it demonstrates a crustacean that is at least 50ft-wide hiding in shallow water.

The ‘super crab’ picture shows the harbour at Whitstable, Kent. And the unexplained ‘creature of the deep’ dwarfs fishing boats left on the nearby pier

The pic appeared on the website Weird Whitstable – a collection of the strange put together by Quinton Winter. He told the Daily Express that he spotted the mega-crab last summer.

Quinton said: “At first all I could see was some faint movement, then as it rose from the water I thought, ‘that’s a funny looking bit of driftwood. It had glazed blank eyes on stalks, swivelling wildly and it clearly was a massive crab with crushing claws. 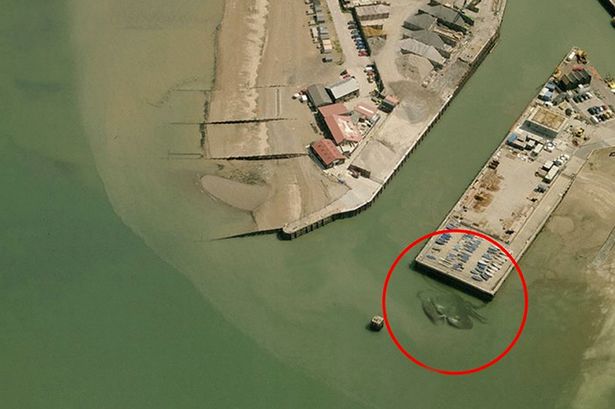 Before this incident I thought the aerial photo showed an odd-shaped sand bank. Now I know better.”

The world’s largest recorded crab is the Japanese spider crab, a species which can grow to around 12ft and weigh up to three stone.