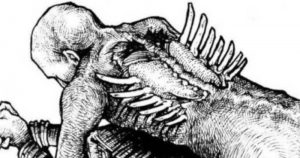 The Blood Eagle was a method of method of execution that was used by the Vikings. The victim would be placed prone, the skin on the back would then be sliced open in the image of an eagle with a sharp tool, exposing the rib cage.

The ribs would then be snapped and pulled back, making it look like you had blood-stained wings. Then, your lungs would be dragged out and left hanging outside your body while you slowly suffocated.

There are two recorded instances of the blood eagle being performed, in one Torf-Einarr has Halfdan Long-Leg executed in this way, after Halfdan and his brother Gudrød Ljome were responsible for murdering his father Rognvald Eysteinsson and 60 of his men by burning them alive inside a dwelling.

But perhaps the most famous occasion of the blood eagle being performed is when Ivar the Boneless exacts this form of execution upon King Aella of Northumbria, in revenge for Aella having executed Ivar’s father Ragnar Lodbrok by throwing him into a pit of poisonous snakes.