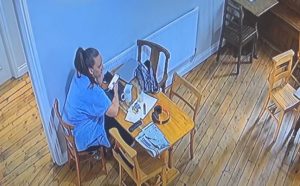 Haley Budd from Cardiff (UK) has been working in a local pub for many years, but now this job is not a joy for her, as she recently witnessed a paranormal during a break, reports The Sun.

A mysterious incident occurred in September 2021, when 33-year-old Haley decided to take a break after a day at work, sat down at the table and took out her phone.

However, the girl did not work out with rest, as the chair spontaneously noisily moved towards her from the opposite side of the table. She didn’t immediately understand what had happened.

“I stared at my phone, but I saw the chair out of the corner of my eye. I heard how it happened and asked the guests if they had seen anything,” says Haley Budd.

“They confirmed that they heard a crash. I tried many times to find an explanation for what happened, but I could not find one. I checked the CCTV system to see if it was my imagination.”

Trying to find an explanation for the mysterious phenomenon, the girl decided to carefully study the recording from CCTV cameras. In the video, Hayley examines the chair under the table in confusion, trying to figure out how it can move on its own, and even with such a noise.

It turns out that over the 8 years of Hayley’s work in this pub, such phenomena occur regularly. Not long ago, the notice board hanging in the hall suddenly began to sway.

No one found an explanation for this phenomenon, so eyewitnesses “attributed” everything to the activity of a ghost.

Despite the fact that Hailey herself is already used to such things, she is afraid that other employees of the institution may get scared and quit. Moreover, some have already threatened to do so if it happens again.