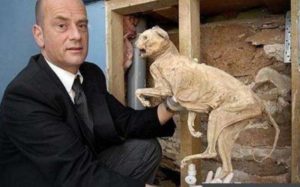 In the medieval centuries, right up to the early part of the 20th century making their homes safe for their families meant not just keeping robbers and murderers out but also the powers of witches and other supernatural forces.

This was done by drawing protective symbols on rafters, beams and window sills or even placing objects within the walls of their home, particularly cats. Although some accounts claim the cats were walled in alive, examination of recovered specimens indicates post-mortem concealment in most cases.

When working on old buildings, it is not uncommon to come across a mummified cat in the walls, over door lintels, under roof rafters, between the chimney stack and the wall and under the floor boards. These were the lengths people went to to ward off evil spirits, witches’ curses and disease, or more positively, encouraging fertility.

Because cats were so readily associated with witches, it would be perfectly normal to take a cat (usually already dead) and place it in a location that was vulnerable to witches entering the house. It was widely considered that witches could fly, so a witch could get in not just through the door or window but down the chimney too.

Cats were also known to sense ghosts and other supernatural beings more readily than humans, which is why it was believed, their presence in the walls of the house helped ward off such malevolent forces.

In addition to protecting against witchcraft, it is possible they are also placed within the walls of houses to scare away vermin in those concealed areas.