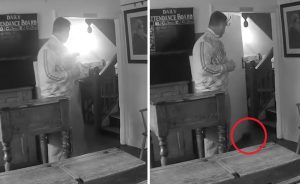 British ghost hunter Tony Fergusson went to the Victorian era Manor Farm in the village of Burledon, Hampshire. Ghosts were allegedly seen in this building, and Tony himself decided to make sure that they exist here. There used to be a school in this building.

Tony propped up the door of the class with a heavy stone and began to ask the ghosts of “playful schoolchildren” to make themselves known and make any noise if they hear him. In addition to the stone, the door also held a strong spring.

Soon after Tony’s words, the door slid open and slammed by itself, despite the stone and spring. This moment is visible on the video below.

Earlier, the 33-year-old building guard warned Tony that he should not anger local ghosts, because otherwise they could frighten people very much.

Tony himself says that even before this video, he noticed how a dark figure in a female dress of the Victorian era very quickly flashed past him, but he didn’t manage to capture this moment on camera.

Tony thinks the ghost was the spirit of a teacher who once worked in this school.

“The teacher most likely tried to protect her territory. The building staff told me that she controls everything here. I want to come back here another day and stay here for the night. Many people have seen this ghost here and I also want to see him”, – Tony said.