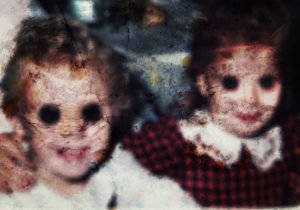 I never believed in ghosts, spirits, or any other “paranormal” thing until a few years back, when my 5-year-old daughter changed my mind.

Around 6 years ago, my family had just moved into a new rental house in Georgia. The house was perfect for our young family. It was spacious, with a huge fenced in the back yard and lots of room for my daughter to play.

The only downside was that there was a rather large and very old cemetery behind our new home. This was only a downside for my wife, who was rather superstitious. I wasn’t bothered at all and soon convinced my wife to take walks through the cemetery with me. After all, it really was peaceful there.

It was also a very pretty place. Soon it became like our very own park and the entire family would take long walks together through that very old cemetery.

Our daughter would run around hiding behind shrubbery and gravestones, jumping out yelling “Boo!” when my wife and I would walk by. I found myself thinking that we had found the perfect life. I even talked to my wife about buying the rental home.

However, it didn’t take long for us to realize that there was something very peculiar going on in our new dream home. It all started when my five-year-old daughter Ava, started playing with an imaginary friend who she called Sarah.

At first, it was cute and we didn’t think much about it. We assumed that it was just a very creative girl with a wild imagination, expressing herself.

Almost every night, when we would all be sitting there having dinner or watching television, we would hear something fall off the shelves in the kitchen. Sometimes we would just hear a “thump” or a bang. We could never figure out where the noises were coming from. At first it didn’t bother us.

Over time, however these unexplainable moments started to increase. After a few months, there was absolutely no shortage of weird occurrences. There were cabinet doors swinging open and closing, more things falling off countertops or shelves in the bathroom. There was also the window thing. We couldn’t leave a window open ever.

It would end up slamming shut and making a noise so loud that pictures would shake on the walls. Once we even called the local police because we thought that someone had broken into our house. However, the police found no evidence of a break-in.

They simply told us that “sometimes old houses settle” and make strange noises. My wife and I both knew that this wasn’t the case. Soon my wife and I were talking about these things and were obviously bothered by the whole situation.

Many times my wife would get frustrated and say, “Ok Ava, enough about Sarah. She is not real.” Ava would always get very upset and sometimes run away to her room, crying.

But Sarah was real.. Either that or we were both crazy, because after a year of living there, we were convinced. You see, soon after my wife started to crack down on Ava’s “imaginary” friend, things became even more strange.

Every now and then, late at night, there would suddenly be the pitter-patter of little feet running down the hallway. Both of us would hear it at the same time.

We would both look at each other, then look at our daughter who would be in the bed with us. We knew that something very creepy was happening. This began happening more and more often. It started to make us feel crazy.

The final straw for us was the last walk we ever took in our “gravestone park” . Ava was running and hiding behind the tombstones as usual. Suddenly Ava stopped running and stood in one spot.

She was pretty far ahead of us, so we couldn’t see at first that she was crying. When we made our way to Ava, I knelt down and asked her what was wrong. “Sarah doesn’t like this place” she said. A terrible feeling was in the pit of my stomach as I looked behind Ava and saw what has forever changed my mind about ghosts.

The tombstone read “Sarah Smith 1923 – 1928”. We had found Sarah. She was only five years old when she died. Chills ran down the spine of my wife and me.

Ava was just about to turn 6 when we moved. We told her that we were going to live in a new house. She seemed sad and said “Bye Sarah,” as we left. Imagine that.