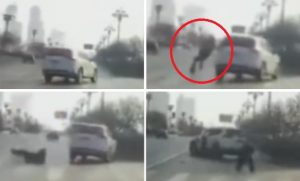 In this video, the moment of instant teleportation was probably captured (see the video below). Another way to explain the sudden appearance of a person right in the middle of the road seems to be simply impossible.

It was filmed in the Chinese province of Jilin on February 9, 2019.

First we see a white SUV quietly driving on the highway. There are no people on the road, and there are no people who are preparing to cross the road. Suddenly, the car turns sharply to the right and we see the reason for this, in a split second, to the left of the car on the road, suddenly, a man falls from nowhere.

The car slows down, but the person does not wait for the driver, he quickly rises from the asphalt and runs off the road.

The video was posted on the paranormal YouTube channel “The Hidden Underbelly 2.0”. As one of the top comments for the video says: “If this is a real video, then this is an incredible and amazing find.”

Someone thinks that the man jumped from the back seat of a white car, but in that case the driver would hardly have begun to wiggle to the right.

Someone suggests that there has not been without supernatural intervention, and that this may be even not a human.