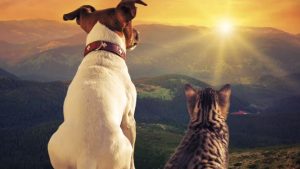 Does your pet ever seem to know something that you don’t know? Does it act like it understands when that should not be possible? Would you believe your pet might be psychic?

Animals can be Psychics, Too

It’s true. Humans are just animals, too, after all. Animals in general are more in touch with their instincts and intuition than we are – they’re not bogged down by all that ‘rational thought’ with people telling us what’s possible or not.

Animals don’t rationalize – they’re able to bypass that part of their brains and tap into other parts more efficiently. That’s why it’s not uncommon for the average animal to have some psychic seeming abilities.

Communication with your Pet

IS your pet good at getting his or her message across to you? Psychic pets are usually good communicators. This is not like a cat scratching and mewing at the food bowl, or a dog sitting by the front door with a leash in his mouth. I’m not talking about your animal’s normal signs of communication and body language.

A psychic pet will sit right in front of you and just stare– boring into you. You may find yourself wondering what your pet wants for a few minutes before an idea pops up in your head. There is a good chance that your animal can use telepathy, and knows it. This is how he is attempting to send you messages.

Try not to jump the gun with this one – if your pet is very possessive of you and doesn’t like anyone, then chances are your pet is just showing possessiveness.

But if your pet is generally amicable towards your friends, family and most people you invite into your home, but occasionally will act very careful and suspicious with the odd stranger, your pet is probably picking up on something you don’t know.

While pets do pick up on emotions naturally, a psychic pet will seemingly understand you. But just like they seem to be better communicators, psychic pets tend to act with more understanding.

A psychic pet is very attuned to human emotions and reacts to them not just with instincts but with understanding.

If your pet is psychic, you may notice strange behavior begin before any hint that an event is coming. Your dog oddly doesn’t want to go out for your daily run with you- halfway through your run, a sudden thunderstorm passes through.

Some pets may stay out of a room or away from an object as if very suspicious of it; later you may find a window there shatters, the light bulbs pop or a picture frame falls off the wall and breaks. Some animals can even predict an oncoming illness, like an epileptic seizure or a heart attack. He may start acting strange around you, making noises and pawing you to alert you of the danger.

Keep an eye on that pet of yours—you never know when he might be sending a message or warning you of something. You’ll find that psychic pets are rarely wrong — it’s just a matter of learning to understand their signals. Having a psychic pet to give you a heads up can really be an advantage that comes in handy.

The Energy of Money: Money Is A Proxy For Energy