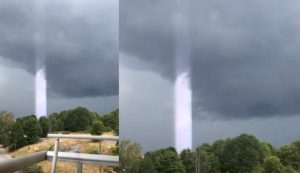 The video below was taken this week by Kristina Skis, a resident of the Swedish city of Eskilstuna.

According to her, she was filming a thunderstorm on the smartphone’s camera when she suddenly noticed a strange flash in the sky, not very similar to a lightning bolt.

The surprised girl watched the video frame by frame and it turned out that this short flash was a huge column of light, rising from the ground to the sky and it was visible only for a split second.

At first, Kristina decided that it was just a reflection in the camera lens, but then she noticed that the light was partially obscured by a cluster of trees near her house, that is, its source was most likely behind them.

Thus, Skis concluded that this was a completely real phenomenon, and not an illusion or a sparkling lens effect.