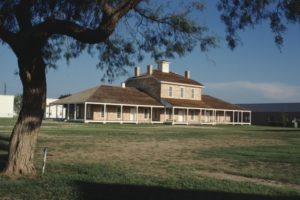 Fort Concho was built in 1867 to protect settlers and transportation routes from AmerIndian attacks.

One of the citadel’s most famous commanders was Colonel Ranald Mackenzie. Due to his successful campaigns against the AmerIndians, he and his men were called Mackenzie’s Raiders.

The fort was abandoned in 1889 because there were no more risks of hostile assaults. In 1935, the city of San Angelo bought the fort and began restoration to turn it into a museum that, as an added attraction for ghost hunters, has its haunters.

The colonel’s specter had been sighted by staff and visitors in his old home at the center of Officers Row, which was their housing. It is said that Mackenzie loved his house and its site because he could see almost everything that was happening in the fort at any time.

A female staff member working in the building heard footsteps walking about behind her. When she turned to see who was there, she was pushed up against a wall by a blast of gelid air.

The women also the sound of knuckles cracking. She believes this was a manifestation of Mackenzie’s ghost because, in life, he cracked his knuckles.

Colonel Grierson’s twelve-year-old daughter, Edith, died of typhoid fever on September 9, 1878 in an upstairs bedroom of one of the houses. Many people have sighted her phantom in this and other houses along Officers Row. Usually, she’s seen playing jacks.

It’s said that the room is colder than the others in the building. Spectral Edith acknowledges the presence of the witnesses by turning her head and smiling at them before she goes back to her game.

When the man delivered the flowers to the Officers Row house, he was asked to put them into two upstairs bedrooms. As he went up the stairs, he noticed the temperature felt cooler than it was in the foyer.

When he went into the first bedroom, he almost tripped over a young girl playing jacks on the floor. The child didn’t acknowledge him. The florist put them on the nightstand as directed, then put the other bouquet in the second bedroom.

Before he left, he looked into the first bedroom, noticed the girl was gone, that the flowers had been moved to a table and her jacks were on the nightstand.

As the florist was leaving, he saw a picture above the fireplace that looked like the girl he had seen. He believed he had encountered the resident’s daughter and told the woman how she had moved the flowers. She told him she had no daughter, that Edith had died in the room and others had seen her.

After the citadel was abandoned, #7 and other buildings were rented as private residences. There are two versions as to whose ghost is the haunter. While the building was vacant, people found the body of a man who had been shot to death.

Some believe he was a trapper, specializing in coyotes, wolves, and badgers and that he was killed in a disagreement over trapping rights. Others say it’s the ghost of a sheep herder who didn’t respect others’ property rights.

He was told not to drive his sheep over another rancher’s land, but disregarded this request. The land owner saw the shepherd approaching and shot him between his eyes.

During Christmastime, staff member Conrad McClure was working in the headquarters building when he saw an ethereal form in a blue soldier’s uniform go past him. He was intrigued by the encounter with the unidentified ghost and did some research.

Second Sergeant Cunningham was the only soldier who died in the fort. The soldier was a chronic alcoholic and died on Christmas Day. Others have reported seeing his ghost looking out of the window.

The spectral voices of Chaplain Dunbar and an unidentified woman have been heard conversing in the post’s chapel. Witnesses have reporting seeing soldiers’ ghosts in the barracks. Mysterious lights dance about in what is now the library.

The city of Angelo did an excellent job of restoring the fort. In 1961, Fort Concho was designated a National Historic Landmark. It offers many exhibits and events.

There are an extensive library and archives which are a treasure trove of history and genealogy for enthusiasts. The ghosts of Mackenzie, Edith, Cunningham, Dunbar and others unidentified remain in the fort.