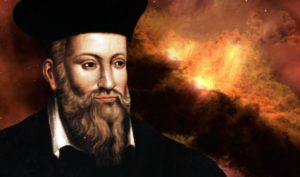 The prophecies of the French astrologer, alchemist and healer Nostradamus, who lived in the 16th century, are relevant to this day. He saw this year as a time when the world would be plunged into darkness.

Nostradamus’ predictions are known to be among the most accurate. It was he who warned about the coming to power of Hitler, the assassination of John F. Kennedy and the blowing up of the twin towers.

The year of the Tiger – namely, this beast is patronized by 2022 – he described as “shaking the world.”

According to the predictions of Nostradamus, published in 1555, in 2022 there is a great risk that one of the world’s nuclear powers decides to arrange a survival experiment for the world, and its rulers will press the “red button”.

Then the world will plunge into darkness for 72 hours, and the consequences of the explosion will be catastrophic – the climate and the position of the Earth will change.

The troubles of our planet will not end there. The soothsayer said that an attack from outer space would be made on the Earth – an “asteroid rain” would fall.

One of the giant space boulders will fall into the sea, causing a terrible tsunami.