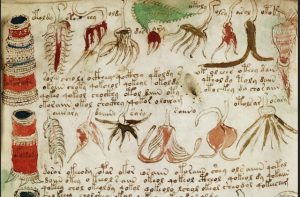 Voynich manuscript is the world’s most mysterious book. It has unknown author, odd alphabet and brilliantly illustrated with puzzling images. Many questioned: who wrote this kind of book and why?

Best cryptographers of modern era failed to crack the codes and gave-up. Imagine, roughly 200 page manuscript strange symbols can be found on this book.

According to historians, at 20th century a man named Voynich visits Villa Mondragone to look for precious books .He inspect a trunk and saw an unusual book. Voynich buy and decipher it for the rest of his life but die without being close to the solution.

Many said that this book is something that can be deciphers by looking at it, but they were wrong. The mystery tells us that somebody wrote something hundreds of years ago and until now,
no one can decipher it. There were 200 pages of parchment, million graphic details, 170 000 characters unfold, tangle text and images can be seen, and an expert eyes can be lost. Because by looking on it you can think of too many theories.

Most of the illustrations detached on reality and most likely a fantasy, a perfectly created illustration of a mysterious ancient book.
If you examine the pages, the plants illustrations are unlike usual plants and more likely abstract figures. Many drawing resembles shapes that can be only seen through microscopes. Is this a glimpse to the hidden world? 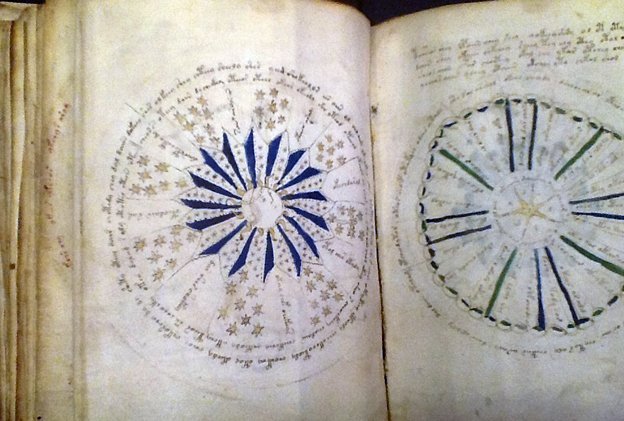 As of now, people can’t read the text but can guest what its meaning. If you will see it, it’s a book about plants with roots, leaves and flowers. Some is like a sort of spiral objects that form like a galaxy, zodiac, stars and many more. Some of drawings are beyond reality. Some contain optical phenomena that bring you to reality and parallel to astonishing shapes. Another question raises what combination of plant and astronomical symbol mean?

An expert explanation: “it is used on medicine in the Middle Ages, so if you want to be treated herbaly, you need to know what’s your zodiac was”. It says that it’s herbal or medical book, an instruction on how to formulate them.”

Through experiment scientist discovered that the first page was torn but its trace of ink can be seen on ultraviolet light and it conveys a secret message also. My question is: But who would produce such a book? Why it was torn?

Some people think that Voynich manuscript was a hoax and just pretending to be mysterious. But here’s the proof – Fact: the surface of the parchments is very smooth and undisturbed. 200 pages of text written without even slight error this is very suspicious. Through the microscope, the manuscript hidden beauty was revealed and this is a great proof of its being genuine and clearly not a hoax. The drawings created by a very skilled painter. As of now you can still see the colors clearly therefore, pigments are very special. Paint and ink – materials that constitute complete appropriate to the 15th and 16th century. Therefore the book is authentic.

The first theory goes like this. It is said that as you first see it you’ll think that it is created by a young Leonardo da Vinci. Does the manuscript contain Leonardo’s first illustrations? One picture there was depicted as astrological picture 15 pregnant sitting in tabs surrounding a ram. Aries is represented as a ram, Aries stand for the month of April, with 15 women, if each woman represents 1 day, it will mean April 15 – Leonardo’s Birthday. The author invested years of his life in order to produce this book; therefore it will be a great value.

The second theory was: a doctor experiment and cured the monarch’s distress through herbs in 17th century. He was promoted to be the imperial chief distiller and recorded his discoveries. But it was extremely secret so many believed that even though the name is found on the first page, it’s unlikely that he is the author. Was the author a medical genius that hiding his discoveries from his competitors?

The third theory: Edward Kelly who was known for his ability to talk with angels was suspected. He might created a nonsense manuscript just for money and sell it to Emperor Rudolf. Kelly is believed to be the only person who knows how to use angelic characters but all of his ways were fantasy and not true. As conclusion, he had all chances to create this kind of hoax.

Many thought that the mystery was solved. Unfortunately after the last experiment conducted, its age was determined through radiocarbon method. It was a big surprise, saying 95% with confidence that it was created from 1404 AD to 1438 AD. This result was extra-ordinary and overthrows all the previous assumptions. None of suspects lived before the manuscript created. Leonardo was born over 50 years later, even Edward Kelly lived 150 years later.

There are lots of other theories formulated. It’s likely a combination of natural science and magic.
It can also be the secret to the fountain of youth. Or will bring us to a new knowledge.

Until now it is the most mysterious book in the world.

Scientific Approach to Ouija Boards: How and Why Do They Work?