The Grim Sleeper of Southern California is thought to be responsible for at least ten murders, plus an additional attempted murder, in Los Angeles from 1985 to roughly 2007. His nickname derives from the fact that he appeared to take a Rip Van Winkle style nap, in the form of a 14-year hiatus from crime, during the years 1988-2002. When he was active, there was so much killing going on in L.A. at the time that it was hard to distinguish one murderer’s work from that of another. Thus, the Grim Sleeper was initially confused with the Southside Slayer.

In any case, when the May 2007 murder of 25 year-old Janecia Peters was linked through DNA analysis to as many as twelve unsolved murders in L.A. dating back to 1985, a special task force was formed. The Grim Sleeper’s profile emerged as an African-American man who had sexual contact with his victims before strangling or shooting them with a .25 caliber handgun. On July 7, 2010, a suspect was arrested. Lonnie David Franklin Jr., 57, was charged with ten counts of murder, one count of attempted murder, and special circumstance allegations of multiple murders. We still don’t know if Franklin is guilty, though. He has not yet been put on trial for what amounts to a quarter century of killing — with plenty of time off for sleep.

Jack the Stripper was responsible for the London “nude murders” of 1964 and 1965 (also known as the “Hammersmith murders” or “Hammersmith nudes” case). The similarities with the nineteenth century Ripper murders are obvious. The Stripper murdered at least six prostitutes, whose nude bodies were discovered around London or found dumped into the River Thames. Two additional victims are often attributed to him, although these do not appear to fit his modus operandi. The Stripper’s third and seventh victims were allegedly connected to the 1963 Profumo Affair. Also, some victims were known to be involved in London’s underground party and pornographic movie scene. Scotland Yard’s initial investigation included nearly 7000 suspects, which was supposedly narrowed down to just 20 men, then 10, and eventually only three. No one was ever convicted of the crimes, and the Stripper, for whatever reason, ceased his killing spree. 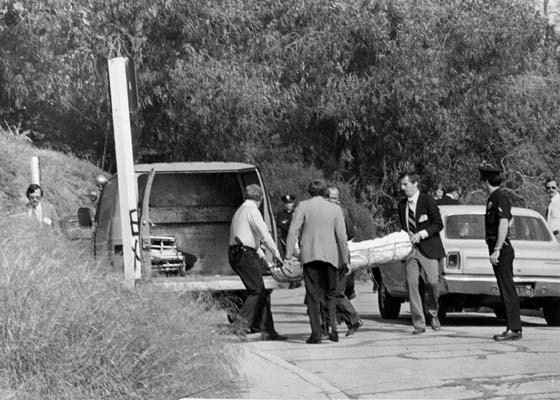 Like the Jack the Ripper killings, the Stripper’s reign of terror seemed to cease on its own, and there were few solid clues for police to investigate. Du Rose’s favourite suspect was a Scottish security guard called Mungo Ireland, whom Du Rose first identified in a BBC television interview in 1970 as a respectable married man in his forties whom he codenamed Big John. Ireland had apparently been identified as a suspect shortly after Bridget O’Hara’s murder, when flecks of industrial paint were traced to the Heron Trading Estate, where he worked as a security guard. Shortly after the trace was made, Ireland committed suicide by carbon monoxide poisoning, leaving a note for his wife that read: “I can’t stick it any longer”, and finished, “To save you and the police looking for me I’ll be in the garage”. Whilst seen by many as a strong suspect in the killings, recent research suggests that Ireland was in Scotland when O’Hara was murdered, and therefore could not have been the Stripper.

Bible John reportedly murdered three young women after meeting them at the Barrowland Ballroom in Glasgow, Scotland between 1968 and 1969. All three women were raped, strangled, and beaten to death. Just prior to the third murder, the killer supposedly took a taxi ride with the the victim and her sister. The sister said the man, who was named John, was soft-spoken and liked to quote from the Bible. As of 2013, the killer has never been identified, although the location and activities of known Glaswegian serial killer Peter Tobin strongly suggests that he may have been behind the killings. No proof of this has ever been established, however, and the case remains unsolved.

On 23 February 1968, the naked body of 25-year-old nurse Patricia Docker was found by a man on his way to work in a lane behind Carmichael Place, Glasgow. The lane was only yards from her home in Langside Place. She had been raped and strangled. The previous night, she had told her parents that she was going out dancing at a nearby club, the Majestic Ballroom in Hope Street, Glasgow. Patricia had, in fact, gone to the Barrowland Ballroom for the over-25s night. It transpired that at some point during the night, Docker left the Majestic and ended up at the Barrowlands where it is thought she met her killer. It was several days after her murder that the police found out that she had actually gone to the Barrowlands. Focusing their investigation on the Majestic cost the police valuable time. Pat’s handbag and clothes were missing and despite months of investigation, neither were ever found.

The Doodler was responsible for slaying 14 men and assaulting three others in San Francisco between January 1974 and September 1975. The nickname derived from the perpetrator’s habit of sketching his victims prior to having sex with them and then stabbing them to death. (One wonders whether the sketches ever made it onto the murderabilia market.) The perpetrator met his victims at after-hours gay clubs, bars and restaurants. Police zeroed in on a prime suspect in the case, who was identified by two of his surviving victims. Yet the cops were unable to proceed with an arrest, since the survivors (an entertainer, and a diplomat) refused to “out” themselves by way of testifying. The suspect, who never admitted his guilt, has never been publicly named, and the murders have faded into obscurity.

Police questioned a young man as a murder suspect in the case but could not proceed with criminal charges because the three surviving victims did not want to “out” themselves by testifying against him in court. Among the stabbing survivors were a “well-known entertainer” and a diplomat. The suspect spoke freely with police, although he did not admit to the slayings. At the time, activist Harvey Milk publicly expressed empathy for the victims who refused to speak with police, stating “I understand their position. I respect the pressure society has put on them.” To date, the suspect has never been publicly named or apprehended; very little information is available about the crimes.

The Babysitter Killer of Oakland County, Michigan was responsible for the murders of four or more children — at least two girls and two boys — in the years 1976-77. The children were abducted and then held for time periods ranging from 4-19 days, before they were killed by either strangling, suffocation, or shooting. Two of the victims were also sexually assaulted with an object. These atrocious deaths caused extreme public fear bordering on mass hysteria, and triggered a murder investigation which was the largest in U.S. history at the time. The Detroit News offered a $100,000 reward for the killer’s apprehension. A number of suspects were investigated — some authorities even considered John Wayne Gacy to be a likely perpetrator. However, the murders remain unsolved.

During a 13-month period, four children were abducted and murdered with their bodies left in various locations within the county. The children were each held from 4 to 19 days before being killed. Their deaths triggered a murder investigation which at the time was the largest in US history. The murders are still unsolved. Fear and near mass hysteria swept southeastern Michigan as young people were inundated with information on “stranger danger”, and parents clogged streets around schools dropping off and picking up their children.

The few who did walk, walked in groups and under the watchful eyes of parents in “safe houses”, where children could go if they felt uncomfortable. Children even avoided using a playground directly behind the Birmingham police station. One incident in Livonia involved a tow-truck driver who assaulted a man he had seen asking two boys on the street for directions. He turned out to be a tire salesman on a business trip from Akron, Ohio, who had gotten lost with no knowledge of the slayings. The Detroit News offered a $100,000 reward for the killer’s apprehension.

Detroit’s two daily newspapers, as well as the area’s numerous radio and television stations, aggressively covered the case. A presentation on WXYT, entitled Winter’s Fear: The Children, the Killer, the Search, won a 1977 Peabody Award.

A more deranged bunch than this is difficult to imagine. How did they get away with it? Dumb luck? Skillful evasion? Police incompetence? Or all of the above? The truth probably resides in the simple fact that it is often just plain difficult — and very time-consuming – to solve murder cases. We tend to take homicide investigations for granted, and assume that justice will be served. However, given the sheer number of homicides, and the complexities involved in most cases, we shouldn’t be surprised that some of our worst psychopaths are able to slip through the cracks, and get away with murder.