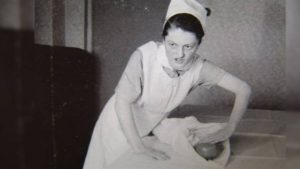 On April 13, 1961, Czechoslovakian maternity ward nurse Marie Fikacková was hanged at Prague’s Pankrac Prison for murdering newborn babies in her care. She was ultimately convicted for the killing of two newborn babies in Sušice in 1960, although neonatal nurse Fikáčková claimed to have killed at least ten newborns between 1957 and 1960.

Marie Fikacková was born on 9 September, 1936, in Sušice, Czechoslovakia, to German parents. She was raised in a dysfunctional family, and her marriage to a Czech man failed. In 1955, Fikáčková graduated from the medical school in Klatovy, and in 1957 began working as a nurse in the obstetrics department of the hospital in Sušice.

On February 23rd 1960, two female newborn babies, aged 20 hours and 5 weeks, died at the obstetric department while Fikáčková was working her night shift.

The following autopsy found the babies had died an unnatural violent death, and as a result, four days later, on February 27, Fikáčková was arrested directly in the workplace, and during the subsequent interrogation she confessed to killing the children.

She admitted that both had their skull cracked, and broke one of their hands, and acknowledging she also used violence against a dozen other newborns, but those – in her words – survived the attack. During the investigation, Fikáčková confessed to killing at least ten newborn babies at Sušice hospital since she began working there in 1957.

The motive for the murders was never officially confirmed, but based on the statements made by Fikáčková, she claimed she developed temporary feelings of paedophobia (the hatred of children) during her menstruation periods and that crying babies would cause her to enter a rage where she beat the children severely, until such time that “My anger faded away after a while and I could continue working.”

The court doctors found Fikáčková to be sane, but prone to depression, hysteria and uncontrollable outbursts of anger.

At her trial, Fikáčková was charged and convicted for only the two murders that occurred on the night of 23 February 1960, as it was not possible to prove the older killings she claimed to have committed, because the police had difficulties substantiating her claims relative to documented deaths and the nurses’ shift calendar. In the end, the courts convicted and hung her with the original two murders.

Marie Fikáčková was sentenced to death, and was hanged at Pankrác Prison in Prague on April 13, 1961.

Despite being convicted over the killing of just the 2 newborn babies, the public has been inclined to take at her claim of double-digit murders.

The two photos included showing her with an infant, were photos taken where the authorities made her participate in a crime reenactment, to show them how she killed the babies.