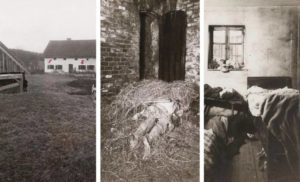 Hinterkaifeck, a small remote farmstead situated between the Bavarian towns of Ingolstadt and Schrobenhausen, about 45 miles north of Munich, was the scene of one of the most horrific and still unsolved crimes in German history.

On the evening of March 31, 1922, the six inhabitants of the farm were all brutally murdered with a pickaxe. The six victims were farmer Andreas Gruber, his wife Cäzilia, their widowed daughter Viktoria Gabriel and her two children, Cäzilia (7) and Josef (2) and the maid Maria Baumgartner. The two-year-old Josef was rumoured to be the son of Viktoria and her father Andreas, who had an incestuous relationship.

A few days prior to the crime, farmer Andreas Gruber told neighbours that he had seen footprints in the snow leading from the edge of the forest to the farm, but none leading back. He also spoke about hearing footsteps in the attic and finding an unfamiliar newspaper on the farm. Furthermore, the house keys went missing several days before the murders. None of this was reported to the police prior to the attack.

Six months earlier, the previous maid had left the farm, claiming that it was haunted and the new maid, Maria Baumgartner, only arrived on the farm on the day of the murders and was killed just hours later.

On the Friday evening of March 31st 1922, someone managed to lure 4 members of the family to the barn one by one, Andreas Gruber, his wife Cäzilia, their daughter Viktoria, and her daughter, 7 year old Cäzilia, where they were killed. The perpetrator then went into the house where they killed two‑year‑old Josef who was sleeping in his cot in his mother’s bedroom, as well as the maid, Maria Baumgartner, in her bedchamber.

Shockingly, the autopsy revealed that young Cäzilia had been alive for quite some time after being attacked, tearing her own hair out in huge clumps as she lay dying in the barn.

On the following Tuesday, April 4, concerned neighbours went up to the farmstead because none of its inhabitants had been seen for a few days and young Cäzilia had not attended school and discovered the bodies. After extensive police investigations, a viable suspect was not found despite more than 100 suspects being interviewed.

The police first suspected the motive to be robbery, and interrogated several inhabitants from the surrounding villages, as well as travelling craftsmen and vagrants. The robbery theory was however, abandoned when a large amount of money and valuables were found in the house.

It is believed that the families killer remained at the farm for several days after the murders, as neighbours saw smoke billowing from the chimney, and someone had fed the cattle, and eaten food in the kitchen. Anyone looking for money would surely have ransacked the place and found it, but as to why anyone would remain at the murder scene for several days afterwards remains a total mystery, especially as no effort was made to hide the bodies.

The death of Karl Gabriel, Viktoria’s husband who had been reported killed in action in the French trenches in World War I, was even called into question as his body had never been found. Despite this, most of his fellow soldiers reported seeing him die and their reports were believed by police, although rumours persist he found out about his wifes incestuous relationship with her father and went back to the farmstead and killed the whole family in a crime of passion. However, most sources agree he was already looking to leave his wife even before going to war, and almost certainly did die in action.

Suspicion then fell on Lorenz Schlittenbauer who had been a former suitor of Viktoria’s. Viktoria had always claimed that 2 year old Josef had been Schlittenbauer’s son, and it was believed that Schlittenbauer could have lashed out in a jealous fit of rage having discovered the child was in fact the result of her incestuous relationship with her father Andreas. Another possible motive was that Viktoria had been on the verge of suing Schlittenbauer for alimony payments immediately before the murders occurred.

He also happened to be one of the members of the original search party who had gone to the farm to look for the Gruebers after they had gone missing. While he had been there, it was reported that the dog tied up in the barn had taken a particular dislike to Schlittenbauer, and had barked profusely at him the whole time he had been there. In addition, one witness said later that Schlittenbauer had seemed to be remarkably unperturbed by the sight of the bloodied bodies, and had been able to unstack the bodies in the barn without showing any sign of disgust.

When he had been asked why he was disturbing the corpses before police arrived, he was reported to have said that he needed to find his boy. Schlittenbauer also demonstrated a beyond normal familiarity with the farm, and was able to navigate his way round the property effortlessly, as if he had spent a lot of time there. All of this certainly raised eyebrows, and Schlittenbauer was questioned extensively by police, but in the end they simply did not have enough concrete evidence to link him to the crime.

The corpses of the six murdered victims were beheaded, and the skulls sent to Munich, where clairvoyants examined them, but to no avail. The skulls were never returned from Munich, after having been lost during World War II.

The farm was demolished in 1923, a year after the attacks, and the victims were buried in Waidhofen, where there is a memorial in the graveyard. Close to where the farm was located, there is now a shrine dedicated the victims.