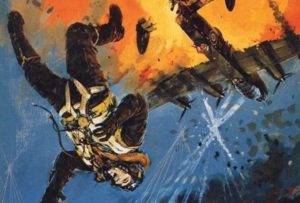 The Human body is an incredible machine. Every day we are bombarded by stories that tell us just how focused and intelligent our body is even when the brain is incapacitated.

It isn’t designed to break before its time, but when it does finally break for good it’s because of a specific set of circumstances. And yet an unusual amount of luck appears to be involved in the survival of some individuals when the time of danger draws near.

But is it just luck? Or is there something more to them that allows them to survive in the harshest of circumstances?

The year was 1944. The greatest war mankind had ever seen was raging in Europe. And so with the massive quantities of airplanes firing red hot shots at one another in catastrophic air battles, men were finding themselves facing extremely dangerous circumstances – although perhaps not as dangerous as one man thought.

Nicholas Alkemade was born in 1922 in Norfolk, England, and was a gardener before signing up with the Royal Air Force when WWII broke out. He was trained as an air gunner, and after completing his training he served as a tail gunner with RAF 115 Squadron.

When the Royal Air Force’s Nicholas Alkemade suddenly found himself in a burning bomber, there was no doubt that he had gotten himself in quite a sticky situation. Death by asphyxiation was not an option as the flames reached around his body.

He knew if he remained in his plane, he would die painfully. And so, Alkemade made a split-second decision. History was about to be made, and all the textbooks were about to be rewritten.

He leaped from the plane hoping to ride gravity down to Earth before impacting on the ground below. It was not a pleasant way to go for anyone who was afraid of heights, but still more preferable than death by fire.

He reached 99% terminal velocity within the first ten seconds of his free fall, quickly accelerating down to Earth. He then fell another estimated 16,800 feet. But as he tumbled to the ground, assured that he would be quickly taken from this world, he noticed something in the distance quickly getting much larger. A clump of pine trees.

Quickly he made peace with himself and his respective higher powers before he felt the first branches of the tree whipping against his body. Snapping branches on the way down, Alkemade slammed into the snow at the bottom and then got up, brushing himself off.

The pilot, Jack Newman along with five other of Alkemade’s fellow crewmembers died as their plane crashed into the ground. Their deaths weighed heavily on the heart of Alkemade, but he was astounded that he had survived the fall and was unhurt aside from a sprained ankle.

Though he was captured by the Germans. He lived for many years after that, living all the way up until 1987.

So was it luck? What are these forces that seem to guide our lives so much? How can one man die from a height of 30 feet while another lives after falling from over 18,000 without a parachute?

The debate has raged since Alkemade first stood up after his famous fall, fueled by each variable no matter how small it seems.

Everything from the depth of the snow to the type of pine tree he fell into has been scrutinized. And the only ultimate conclusion we can come to is that his survival is simply unexplainable.