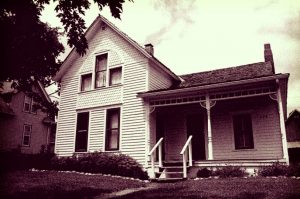 There are many different types of serial killers and while it could be argued that they are all far from sane, there are very few so batshit insane as to be attributed with being the inspiration of a B-movie Hollywood stereotype. Introducing the Villisca Axe Murderer…

Summer 1912 in the sleepy town of Villisca and the six members of the Moore family are entertaining two of their children’s guests that had been staying with them at their 508 E 2nd St residence. That night the two adults and six children all aged under 12 would be there last. Sometimes very near to midnight the house was broken into and all those in it would be killed with an axe.

The post mortem study stated that the Villisca Axe Murderer began in the master bedroom, where he found the parents asleep in their bed. Josiah was viciously attacked with the axe, receiving more blows than any other victim. In fact, the report stated that he had received so many axe chops to the face that his eyes were missing. The killer then went into the children’s rooms and chopped into the heads of Herman, Katherine, Boyd, and Paul in the same manner as their parents.

The grisly work of the family’s murder by axe complete and the murderer could have left, but instead the killer moved downstairs and across the home to the guest bedroom where the childrens’ friends Ina and Lena were sleeping. Despite being carried out by axe the murders were so well carried out that examiners stated that all but Lena had been asleep when attacked.

In a sleepy town like Villisca Iowa you don’t just chop up an entire family and their friends in the night and expect it to end with a police report; every hobo, transient and stranger from Villisca as well as neighboring towns were rounded up as suspects, but none proved a strong enough case for the authorities to pursue.

One drifter brought in was Andy Sawyer who had recently taken up employment chopping wood for the nearby rail-road Upon being approached by the Sheriff Sawyer reportedly swung his axe shouting “I will cut your god damn heads off”. However; further investigation revealed that sawyer had been arrested for vagrancy in Osceola, Iowa the night of the murders and could not have been the killer.

Having exhausted the crop of drifters and strangers, Villisca police turned their attention to members of the community with low reputation, even those having only rumors of low reputation.

This included the Reverend George Kelly, who was rumored to be unbalanced and a pedophile The reverend was an appealing suspect for the authorities as he too was a bit of a drifter, being a traveling reverend. More suspicious was that both he and his wife left Villisca the day after the murder. The reverend was picked up in Logan Iowa, but before he could be formally charged another suspect arose.

State Senator, Frank Jones lived in Villisca at the time of the murders and it was rumored that Moore had been responsible for a significant loss to the Senator’s business. The case out against Senator Jones was that he had hired William Mansfield to murder only Mr. Moore, but that he got far more than he had bargained for. As it turns out Mansfield had something of a passion for chopping people up with an axe.

Two years after the Villisca axe murders Mansfield murdered his wife, infant child, father- and mother-in-law with an ax in Paola, Kansas. He also took his axe to the heads of Jennie Peterson and Jennie Miller in Colorado before finally being apprehended.

Despite somehow evading the courts by way of alibis on many occasions it is today believed that William “Blackie” Mansfield killed at least twelve people with his axe from town to town along a single rail line, a rail line that ended in New Orleans.

Today there are still no concrete answers and no persons convicted of the murders. The Villisca house still stands and is in fact open for tours.