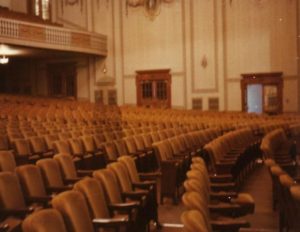 In northern Minnesota, about 80 miles northwest of Duluth and located on the iron range, an almost medieval-looking castle rises against the skyline. From marble staircases and brass railings to art deco walls, this place is like no high school ever seen.

The Hibbing High School auditorium modeled after New York City’s Capitol Theater, many details of this great room, such as its woodwork, engravings, artwork, and crystal chandeliers, make this a place that will take your breath away.

The auditorium is also the home of legends—both the musical kind as well as the ghost of seat J47, who has been known to make an occasional appearance for the camera. The Hibbing High School auditorium, considered by ghost hunters to be among the world’s most haunted places.

Though stories of eerie events have circulated about the auditorium for decades, a handful of photographs taken with an old Polaroid camera in 2000 have been by far the most bizarre.

The photographs, taken by the school’s stage manager, show the apparition of a man sitting in seat J47, watching the theater shows. Many people believe the image to be the ghost of the old stage manager, who died in 1942. 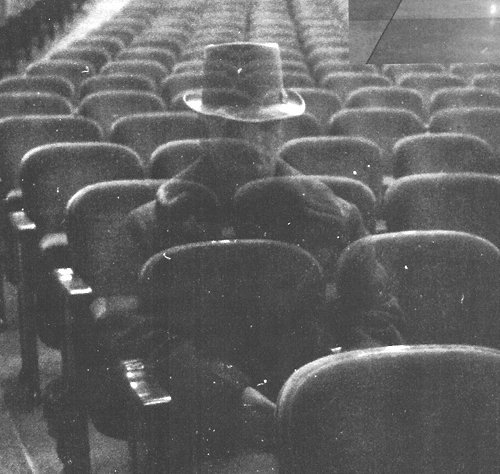 Hibbing, Minnesota, is a blue-collar town. Generations have toiled pulling iron ore from the ground in the area’s steel mines ever since mining explorer Frank Hibbing set foot on the land in 1892.

Within a year of its discovery, people were moving to town in droves for the job opportunities of working in the mines. By July of 1893, a 2-squaremile town site had been laid out and was given the name of Superior. The little town was on a fast-track to growth.

The name Superior was changed to Hibbing in honor of its founder less than 15 years after its incorporation. Town residents were grateful to Mr. Hibbing for his discovery that led to steady work for so many.

By 1914, Hibbing’s economy was booming—it had been called the “richest village in the world.” The assessed valuation of this village was more than $84 million. This steel town was getting a lot of luxuries from the profits of Oliver Mining Company, a subsidiary of U.S. Steel Corporation.

Hibbing is also known as the town that moved. As 1920 arrived, large deposits of iron ore were being discovered in the midst of residential neighborhoods. The mining company was buying all of the property it could, but eventually whole neighborhoods were going to have to be moved.

In exchange for the major inconvenience of relocating houses (at the company’s expense), Oliver Mining Company proposed the building of a grand high school.

Initial construction on Hibbing High School began on April 28, 1920, when a building contract was awarded to Jacobson Brothers Construction. The initial cost was $3,927,325. In 1922, a stage manager named Bill was brought in from New York to run the impressive auditorium (I’m withholding Bill’s last name, as he still has family who work at the school).

Bill loved the theatre and loved overseeing the performances in this impressive piece of New York, cloned and placed in northern Minnesota. The Hibbing auditorium held vaudeville performances, symphony orchestras, and school plays.

The school was initially built in the shape of a capital “E” and would house grades ranging from kindergarten through a two-year junior college. It also housed several spirits who still haunt the building but seem to focus most of their attention on the auditorium.

Ghost stories are not the only legends that come from the Hibbing High School auditorium. Folk rock singer Robert Zimmerman (better known as Bob Dylan) made one of his first public performances on the auditorium stage during a talent show when he was a student there.

Zimmerman was a graduate of the Hibbing High School class of 1959. Today, Hibbing is a town of 17,000 people. The heyday of the iron mines has past, though a few are still open and employ some of the locals.

Some of the rumors behind the ghost stories that have gone around the high school include someone falling off the balcony and dying, one of the chandeliers falling on a person in the seats below, a physically disabled student with health problems expiring in the auditorium, and the death of the auditorium’s first stage manager, Bill.

Chuck Perry was able to verify the story of the disabled girl dying in the auditorium to be true, and Bill did pass away in the 1940s. The others, he was not able to verify.

Perry recalled one incident in the early 1990s when a devoted Dylan fan and apparent New-Ager walked into the auditorium. Perry said, “She walks around the rows of seats, and she mentions something about a chill.

And I said, ‘Yeah, okay, sure.’ Pretty soon she starts talking about this seat J47 specifically. She says she can feel something there.”

Perry dismissed the event until shortly after he saw a special on an educational cable channel about people who go into graveyards trying to photograph ghosts. Perry thought he’d try his hand at spirit photography and use seat J47 as his test.

Perry said, “I took an old Polaroid [camera] that I had backstage—basically it was a prop. I went and bought some film for it, and I set it up on a tripod right at seat J47. I took a few pictures, and basically nothing happened. I tried it a few more times and took about 50 pictures total. Six of them came out with something in them.”

As others around the state have heard about the ghost of seat J47, they too have brought their cameras to try and capture something. The most profound of the six pictures Perry took can be seen at the beginning of this chapter.

You can see a semi-translucent man wearing a hat and sitting in seat J47, which is located in the center section of seats, on the right side of that section if you’re facing the stage. The seat has some people spooked. Perry said, “There’s kids that come here that won’t sit there. They don’t even want to walk by it.”

Perry has also had a few unexplained experiences within the auditorium. On November 26, 1996, Hibbing High School fell victim to a significant amount of smoke damage due to a fire that broke out when some remodeling work was being done on the west wing of the building.

The school would remain closed for more than a month for repairs. Perhaps the spirit in the auditorium was watching out that there wasn’t another fire?

The first story Perry ever heard about ghosts in the auditorium involved the backstage area. Perry said the encounter took place in the mid-1970s, before he started working at the high school.

He said, “We have 10 dressing rooms, and one of them is really large. Supposedly this gal was back there getting her makeup on before the show. Somebody walked in the dressing room she assumed was in costume, she looked up, and they just kind of were gone. And that happen two or three times in that room.”

A janitor at the school, who wished to remain nameless, claims to have heard someone enter a classroom behind him when he was cleaning the room one night. Every time he turned around to look, he heard footsteps move back into the hall.

When he turned back to his work, the steps returned. He never saw anything, but he certainly heard the footsteps. People from all over Minnesota have heard about the ghosts in Hibbing High School.

Source: The World’s Most Haunted Places by Jeff Belanger