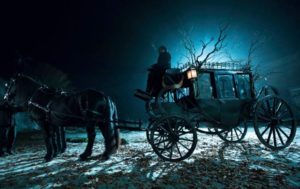 SOME GHOSTS ARE known as “intelligent hauntings,” spirits that momentarily return to deliver messages to loved ones and are able to interact with the living. Others are known as “residual hauntings,” people or events that seem to be recorded on the environment and, on occasion, replay, sometimes with both visuals and sound.

Residual hauntings are moments captured in time that through some unknown mechanism of nature reappear to go through their motions, again and again.

Police officer Steven C. and his partner witnessed just such a residual haunting while on duty near the eerie moors of Durham Country in northeast England. This is Steven’s story…

This event took place two nights before Halloween, 2012. Coincidently, it was my 35th birthday. I’m a police officer, having worked for the Durham Constabulary (police force) in the U.K. for nearly nine years. I am a very logical and rational person with an eye for details and a great memory. You have to be to be a police officer; you rely on it.

However, I can find no explanation for what occurred this night.

I work in a semi-rural setting, so it’s mostly petty crime, such as break-ins and thefts. Nevertheless, I’ve had a fair few “odd” call-outs here and there, but they almost always turned out to be nothing.

Around Halloween, however, the number of nuisance calls always goes through the roof! It’s usually drunken teens (or adults!) doing things they shouldn’t or getting a little carried away with the spirit of things and spooking the elderly, etc. Never anything serious.

On this particular night, my partner and I were patrolling our usual area, which is a small town in County Durham. We’d had a few nuisance calls that night, so we were patrolling to show a police presence in the area.

At about 11.00 p.m. a call came up from an elderly couple in a farmhouse a short way out of town saying that they had been disturbed by somebody driving a horse and carriage up and down the lane by their house.

A slightly unusual call, but we proceeded to check it out. The farmhouse was a short drive away via some back roads. I remember it was a very cold night for that time of year and there was a full moon, so the countryside sort of “glowed” in the moonlight. Rather picturesque, but very chilly.

We arrived at the property around ten minutes later and were greeted by the husband. From the moment we stepped out of the car, my partner and I both felt something wasn’t quite right. Maybe it was the wind or the chill in the air, but either way something felt “off”.

I asked the gentleman what happened, and he described hearing the sound of a horse-drawn carriage and a man’s voice driving them up and down the road, occurring every 20-30 minutes or so.

I asked the man if he’d seen the horse and carriage as the lane ran right by his house. The elderly gent said that he had tried to see it, but to no avail. I asked what he meant. Then he explained that he had gone out to the end of his drive as he heard the carriage approach.

He stood behind a tree, so as to be hidden. As the carriage turned the corner to pass his house, however, he could only see the lamps of the carriage. No carriage, no horses, no person. Just lamps.

My partner and I thought this a little strange. Surely, it must have been too dark for him to see the carriage. Either way, we said there was little we could do immediately, other than keep an eye out for the suspect and maybe ask him to give it a rest if we saw him. He thanked us and, true to our word, we drove up the lane to give it the once over.

The lane eventually runs off into the moors, so we didn’t want to go too far, given as it was a busy night for call-outs. After maybe a mile or so, my partner (I was driving) saw some headlights come over the hill in the distance. We joked it was the horse and carriage we were after, so we pulled onto the side of the road.

As we observed, they appeared to be travelling very fast. We immediately put our “police” heads on again and prepared to pull somebody over for speeding. As the lights drew nearer, however, we started to hear charging horses and rattling wheels.

The sound was a little “off” though, like it was muffled or echoed from further away than it was. We looked at each other, utterly astounded and a little spooked.

Before I could even reach for the ignition, we saw the lights come up over a bump in the road immediately ahead of us. However, now it wasn’t just lights. I saw a very faint, shimmering outline of a carriage, what looked like two horses and, atop it, the outline of a figure.

I don’t know why, but as this apparition charged past us we both got the distinct feeling that the figure driving the carriage looked right at us! Just as it passed us, the noise and the lamp lights vanished. My partner said as it vanished, he heard the slightest laugh (although I don’t recall that). 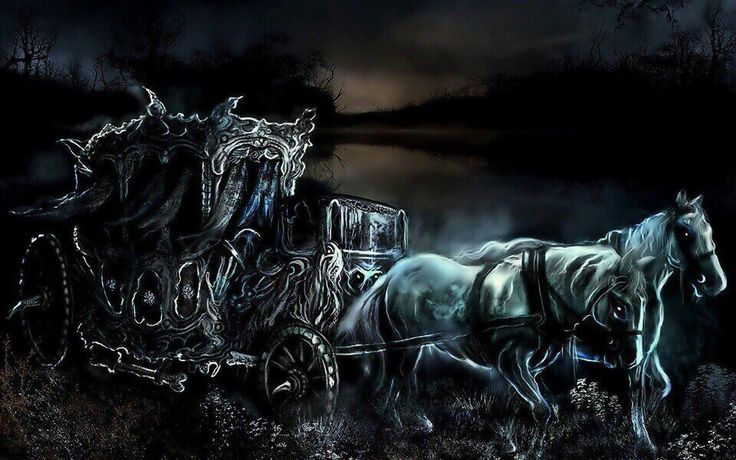 My partner and I were thoroughly spooked and more than a little uneasy after the incident. Eventually, we pulled ourselves together and headed back down the lane and toward our usual patrol area.

We decided not to stop in on the old couple, thinking it would be best not to scare them. For the rest of our shift, my partner and I never discussed what we saw, and it was only a couple of nights later (on Halloween appropriately enough) that we discussed it with some close friends.

We agreed not to go to our superiors with the information, but my partner did some investigating and ran an ad in a local newspaper (anonymously). The newspaper received calls and letters from people from across County Durham saying that this lane is haunted by a phantom coach.

One of the replies said that the apparition is a highwayman trying to escape the authorities. Perhaps that’s why my partner heard him laugh at us as he passed?

I don’t know. I do know that whereas I never used to believe in spirits or ghosts or anything like that, I have a greater respect for it all now and remain convinced I’ve seen something, even if I’m not 100 percent sure what it was.