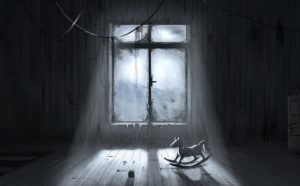 What I am about to share with you is true, slightly unbelievable yet very true.

I grew up in a small Midwest town in Ohio, my dearest friend lived just two houses away from me. She lived with her family in a large Victorian styled home where I spent many nights and days with her there. I will always remember how peculiar it felt to be in her house with no one but the two of us or perhaps her little brother there. The feeling was like what spiders might feel like as they creep their way up your neck and spine…very strange.

As children we would just dismiss it and go on, but there were times that our naivet would not prevail. Such as when we would hear heavy footsteps on the stairs leading to the second floor, or the toilets would flush, water would run from the faucets, and no one would be there when we went to look. For instance, one summer day my friend and I were in the master bathroom playing with our hair, as young girls do, when out of the calm air, came a chilling wind so strong that it knocked the plant that was hanging from a macram planter into the bathtub!

However frightening, nothing that had happened thus far scared me as badly as what I am about to share with you. I was in high school at this time and my friend’s mom asked me if I wouldn’t mind staying for a few hours with her youngest son, he doesn’t like being alone. No problem, after all he was 12, not too much to do, just watch TV and hang out while he played with his lab kit and telescope! HA HA HA! Not even an hour into the night, the walking on the stairs began, not too bad, actually a little used to it.

Then the most awful gut wrenching bellow came from upstairs! It lasted for what seemed like an eternity, my friend’s brother was freaking out wanting to leave, while I’m standing in the foyer which leads to the stairs, nervously deciding what to do.

My heart was thundering in my chest, but I needed to make sure no one was in the house. I thought if we left and went to my house and there was someone inside they might rob or tear up the place. I felt a sense of responsibility mixed with a bit of courage, as I ascended the stairs. My legs were like jelly, but I needed to know what was going on.

When I reached the first landing I saw nothing but felt the air around me grow cold and with each step it became colder still. At the top of the stairs I looked down each end of the hall, nothing, and no one. I went to the closest bedroom first, nothing unusual or out of place, next bedroom, again nothing. Then at the end of the hall, my friend’s bedroom, I opened the door slowly, butterflies in my stomach. As I looked in the room I was shocked to find her closet was destroyed! Clothes, shoes, books were thrown everywhere!

I was terrified, what the heck was happening?! As I left her room I closed the door behind, only to find it open again as I was halfway down the hall. I wasn’t about to go back in there. So I proceeded to check the last three rooms, bathroom-nothing, I was now at the door to my friend’s parents room. My hand, sweaty and cold, is on the door knob I had a feeling of extreme dread wash over me as I began to open the door. Behind me came that loud guttural sound, and the air around me was freezing.

I wasted no more time, I ran to stairs, taking two at time, nearly falling. As I walked through the family room I noticed the picture over the fireplace had fallen and broke. I wandered what else had happened, I remembered thinking, where was my friend’s brother? I found him in the kitchen crying sitting in the corner nearest the door holding his dog, it was pitiful. We wasted no more time, we left and went to my house. My parents were not home yet so I just waited patiently, nervously wondering what or who was in my friend’s house.

Finally my parents were home and I told them what happened. I thought for sure they thought I was crazy or was making it up, but little did I know, my parents were very understanding and shed a little light on the subject for me. They too have been privy to unexplainable occurrences in that house.

Some of which included what I have already mentioned and others that I have not. One particular thing that my friend’s parents shared with my parents over dinner one night is very creepy! While they were laying in bed one night, my friend’s dad yelled out in his sleep ‘what do you want?’ Her mom was awakened, wondering what was going on, as she turned to look at him it seemed her that his arm was being tugged by someone, but no one was there.

She thought since her husband was sleeping that it was just her imagination or her eyes not quite focused from being awakened so suddenly. Although the next morning her husband was astonished to see that his arm was badly bruised and swollen. On one other account my parents were told that in the master bedroom along one side of the wall are dark streaks that no matter how much they have been cleaned they always seem to come back.

These accounts are true and of course the latter were told to me by my parents, which I have no reason to doubt the integrity of the events they shared with me. Use your own judgment as you think about what I have witnessed. The house is still in the family and for the last 8 years not too much has happened, just a little water running, nothing more nothing less. Perhaps whatever or whoever it was is now at rest and no longer feels the need to terrify the family that so loves their beautiful home.

Real Story of the Ghost In The Striped Blazer

Haunted Fort Laramie and Legend of the Lady in Green