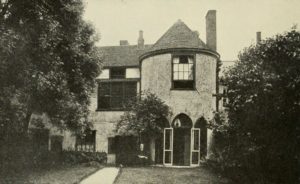 In Surf City, New Jersey there was a hotel known as “The Mansion of Health”. It was built in 1822 in an area of Long Beach Island once known as “The Great Swamp”.

The Mansion was the largest building in Surf City and its most impressive feature was a balcony that ran along the entire top floor.

One of the worst storms in New Jersey history battered Long Beach Island in April, 1854. A ship called Powhattan, filled with over 300 newly arrived German immigrants became caught in the storm and was forced closer and closer to the Island. Suddenly, the Powhattan was slammed against the rocks and a large hole opened in the bow of the ship. There was nothing anyone could now to stop it sinking.

As word spread of the disaster, a small crowd of people gathered on shore, but the storm prevented any hope of rescue. The ship began to break apart, and passengers, some already dead, began to be washed overboard. All the crowd on shore could do was do search among the debris and bodies for signs of life. None was found. The entire crew and all of the passengers had perished, and only fifty of the bodies had come ashore on Long Beach Island.

The State of New Jersey had appointed “wreckmasters” along the Jersey Shore to deal with just such disasters. The wreckmaster’s responsibility was to salvage anything of value that came ashore after a shipwreck, and to see to the proper storage of the dead until the coroner could arrange burial.

The wreckmaster at Long Beach Island was the manager of the Mansion of Health, Edward Jennings, and the salvage and the deceased were piled outside the hotel. When the coroner arrived the next day, all seemed in order.

However, as he examined the bodies of the dead he found one thing missing. None of the men or women had any money with them. This was most unusual. After all, when immigrants came to America, they came with everything they could carry, especially cash. It was the usual custom for passengers to wear money-belts around their waists to protect their life-savings, but the coroner could find none.

Immediately, suspicion of foul play was directed at Jennings, but there was no proof that the wreckmaster had stolen any money, or even that any money existed. The bodies of the fifty men, women and children were shipped to Manahawkin and buried in pauper’s graves in the Baptist graveyard.

In the months that followed the suspicions concerning the missing money were forgotten, and life at the Mansion continued as before. However, when another storm ripped through the Island a few months later, a most unusual event occurred.

The waves from this storm had reached near the Mansion of Health, and caused some erosion near the stump of an old cedar tree, a bygone relic of the area’s freshwater past. It was there that neighbors and guests found something most unusual. In a hole, now no longer covered, were dozens of money-belts, all cut open and empty.

Jennings’ guilt was now obvious to the Islanders, and he was forced to flee in disgrace to avoid prosecution. But his troubles did not end there. It is said that he was broken by his misdeeds and suffered from terrible nightmares, perhaps haunted by the spirits of those poor souls he robbed, throughout the rest of his life. He died in a barroom brawl in San Francisco.

The spirits of the dead of the Powhattan were not satisfied with the death of Edward Jennings. Soon after the wreck stories began to circulate concerning strange occurrences at the Mansion of Health. Guests staying at the hotel complained of hearing sobs during the night, and catching glimpses of shadowy figures walking on the balcony. It did not take long for the rumors to spread, and soon the hotel was forced to close.

In 1861, a group of five young men decided to stay overnight in the vacant building. They bedded down on the third floor and as they began to drift off to sleep, one of the boys glanced out the window at the balcony. What he saw there frightened him terribly and he screamed for his friends to wake up.

On the balcony sat a young woman holding a small child, gazing sadly out to sea. The light from the moon seemed almost to pass through her. Then suddenly, both mother and child disappeared. The five boys ran out of the building and headed for the mainland. From that day on, nobody would dare set foot on the third floor of the cursed hotel after dark.

The Mansion of Health never again opened, and it burned to the ground thirteen years later, in 1874. On the site, the new owner built the Surf City Hotel. The State of New Jersey placed a monument outside the Surf City hotel to remember the 300 people who perished in the shipwreck and to hopefully appease their ghosts.