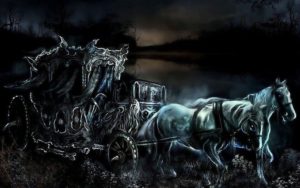 The ringing spectral bells warn people the phantom carriage and ghostly procession is going to arrive in Waterworks Valley. Those who stay will see a bride.

Waterworks Valley, St Lawrence Parish, is in the Channel Island of Jersey. St Lawrence, known for pleasant pastoral walkways and green lanes, is a rural parish. Its coast by St Aubin’s Bay is part of a busy region, and more so, on sunny days and during the tourist season.

The parish is home to Hamptonne, a restored Jersey farm complex that’s open to the public and an excellent site for educational trips. Waterworks Valley, with a walkway, is in this parish.

The valley is named for the numerous numbers of reservoirs located along its length that were built and used by the Waterworks Company.

Even during the daylight hours, it’s an ominous, haunting place, damp and dark – overcast by a thick layer of trees and vegetation. Innumerable people have seen it pass by and many have run away after hearing it approach. They say it is the Phantom Carriage.

Usually the repetitive paranormal incidents happen in the evening and start with the faint ringing of bells. The eerie music is said to sound more like wedding bells than something melancholy.

Gradually, witnesses hear, mixed with ringing, another uncanny noise that starts hazily before it becomes discernible. The noise crescendos until it’s obvious that the sound is horses trotting in the valley and accompanied by the whirling, bouncing clatter of a carriage.

Years ago, a couple were walking home through Waterworks Valley. As it reached midnight, they heard a peal of bells. They began to walk faster – then they realised that the bells they could hear were in fact wedding bells. 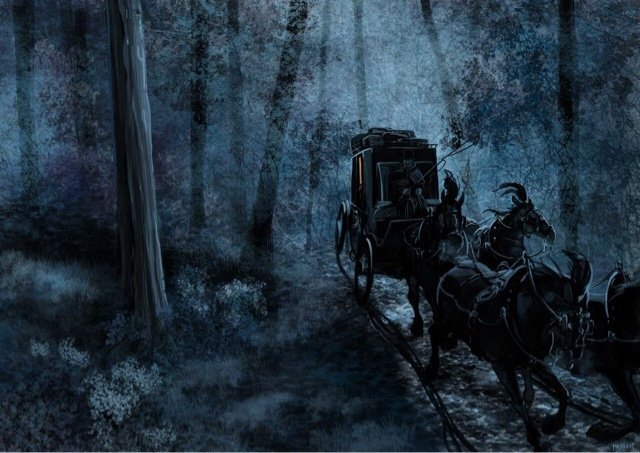 A bridal procession slowly appeared round the corner – a coach drawn by six horses, with footmen and a coachman. As the coach passed, the couple looked inside at the bride, dressed in her magnificent white wedding dress.

But the bride had no face – under her wedding veil there was just a skull. Scared out of their wits, the couple ran the rest of the way home. At first, they worried that people would laugh at them, but when they told others about their encounter, they were told about an old legend.

Countless people have seen it pass by, and even more have run away after hearing it approach. This, they say, is the ‘Phantom Carriage’.

One tale of explanation claims that in the early eighteenth century a girl who was due to be married at St Lawrence parish church was disappointed at the altar.

It was only as the groom lifted the veil that he noticed the pale lifeless face of a corpse underneath.

Many people believe that this phenomenon happens once a year, at a specific time; however there are too many sightings and vivid memories of the carriage to support the belief that the event occurs only once a year.

Technically, this is a residual haunting, one that is like a videotape imprinted in time and space. There is no intelligence and the same scenario is repetitious.

Many people believe that the legendary girl’s emotions created the haunting. The legend about the groom seeing her cadaverous face appears to be mere folklore.

It’s a stretch of logic to think a ghost would go into a church for her wedding and appear to her groom as a corpse.