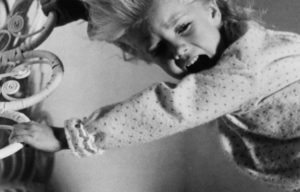 My husband and I along with our 16 month old son just moved into a house. We have experienced severe temper tantrums when my son was put down in his room to play or to sleep or just to kept behind the baby gate while we did the myriad chores of straightening a home after a move.

A friend of the family is a witch and she told me that there was a poltergeist in my house trying to attach itself to my son.

This frightened me more than you can know since I have seen things I can’t rationally explain happening in my life. I dreamt of a car wreck and I dreamt of my sister dying within a month of each other. I had my car wreck Sept 9, 1996, my sister was found dead from a diabetic coma on Nov 15, 1996.

So I believe that there are things out there that aren’t explainable.

My friend told me about the only way to keep this poltergeist from attaching to my son until the next full moon when we would cleanse the house was to keep contact with him. Hug him, hold him, sleep with him in the same bed.

So I followed this course of action and picked my sleeping son up out of his crib and took him into my room with me when it was time to go to sleep for the night. My son curled against me and slept so sweetly that I too soon drifted off to be awakened by my son sitting straight up in bed, still asleep!

I put my arms around him and felt something pulling on him, trying to pull him out of my arms. I held him tighter and screamed that they couldn’t have him. I called another friend of mine and she placed a bubble of protection around my son so strong that I, who has almost no recognition of power, could see it.

My son immediately calmed down and stopped struggling against me. I called my husband to come home from work and something tried to keep him from arriving. The car, which is a clutch, died several times on the five mile drive home. The next day when he checked the car he found three vacuum hoses pulled off the back of the motor.

These hoses had plenty of slack in them and could not have come loose by themselves. To this date I still have sixteen days to go until I can bless my house and seal it off from the bad elements of the world, but my son’s room has been purified and blessed and he is once again a happy, healthy little boy.

Terror in Our Playland: My Ghost Story