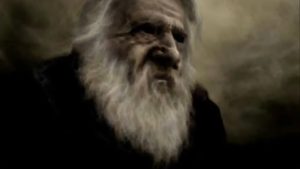 John Lasik a small structured, gray bearded man remembers a ghostly encounter from his grandfather that still makes his spine tingle to this day, though it happened more than 60 years ago.

It all began in the summer of 1949, the year that John should be enjoying his bachelor life. Instead, it turned out to be the beginning of nine months of unexplained phenomena.

“I was 19 when I moved into my grandfather’s house alone in Walnut Hill, New Hampshire,” he said. His only companion that moved in with him was his cat.

“I was looking forward to having fun with my friends and hanging out with them,” he said. Being away from his family, John thought that he and his friends would be able to do the things normal 18 and 19 year – old boys enjoyed.

But the anticipated frivolity never transpired. Instead something, or someone, breathed a heavy mist of fear into John’s livelihood.

He soon learned that he was not alone in the house his grandfather built almost 100 years ago. “That summer the strangest things began to happen in the rear of the house,” John said.

“Doors and windows began to slam. I’d go back there because I thought someone had come in.” Upon inspection though, he would discover the screen door and windows were securely latched from the inside.

“There was no way anyone could go out and relatch the door or windows,” John said. One of the more unnerving occurrences even stood his friends’ hair on end. When his friends hung out in the kitchen, which is located in the rear of the house, their cigarettes would mysteriously snuff out.

This happened on numerous occasions, but never in the front portion of the house. “I was scared to death of that bedroom, “said john of the room from which most of the spooky happenings seem to take place.

That room, which had a window to the kitchen, happened to be his late grandfather’s bedroom and the room in which he died of natural causes 16 years earlier.”

Between the unexplained noises, and the cat’s fearful aversion, John became convinced the rear of the house was haunted. “I would go to bed at night scared to death. It got to the point were I couldn’t go into the back of the house.

I began eating in the living room instead of the kitchen. Although I never saw anything, I felt a strange presence around me,” John said. “That particular summer was really frightening for me.”

One of the strangest occurrences, however, convinced him that the ghost was his grandfather. “All the doors inside the house were locked with one skeleton key, including the bedroom door. Sometimes the door would be locked and other times it would be wide open. And I never had the key to that door.”

The events of that summer put a damper on John’s activities and have caused him to wonder about the other side. And to ponder, perhaps, that his grandfather’s antics were meant to keep him out of trouble.