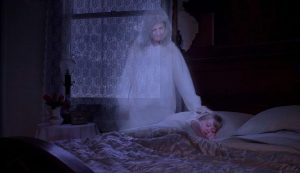 25-year-old Heather Brau and her 30-year-old fiance Josh Higgins from the US state of Michigan claim that a supernatural phenomenon recently occurred in their home. The couple’s one-year-old daughter, Lily, slept in her bed at night, when a whitish human figure suddenly appeared in the darkness of the child’s room and woke the baby.

The baby even got up on the bed from fright and then the mysterious silhouette rapidly moved to the side, leaving behind a pale plume. Then the anomaly disappeared. The girl’s parents found out about the incident only the next day when they watched the recording received on the eve with the baby monitor.

The astonished Americans then remembered that something strange was happening in their home before. For example, Heather and Josh repeatedly heard in the dark as someone quietly walks down the corridor, creaking floorboards.

And at the beginning of this year, lovers began to notice that the light in various rooms is turned on and off by itself. The Americans who do not believe in paranormal activity tried to explain all this logically.

But the video from the children’s room literally shocked them… As you might guess, the future spouses were not too happy to deal with paranormal. Alas, they do not know what they are doing, and therefore they posted the material on the Internet with the hope that somebody will help.

Some Internet users recommend the couple to turn to psychics or church representatives, although they immediately express doubts about the effectiveness of such assistance.

According to others, Heather, Josh and Lily need to move to another place as soon as possible, although sometimes it does not help if the poltergeist is tied to, say, the same child, and not to the dwelling.