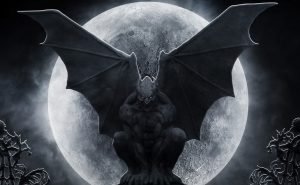 In his best-selling book “The Mothman Prophecies”, John Keel mentions a story of a sighting by four teens of a headless flying beast in the UK.

That creature, which has become known as the Bat Beast of Kent, or the Saltwood mystery, was encountered three years to the day before the Point Pleasant Mothman was encountered by the Scarberrys and Malletts, at the TNT area in West Virginia.

John Flaxton, age seventeen, was walking along School road near Sandling Park in Kent, England on the night of November 16, 1963, with three friends. Flaxton said he suddenly felt very cold and had an overwhelming feeling of fear.

Flaxton was not alone as his three friends felt the same way. The four teens then saw something in the sky. At first it appeared to be a star, but then it came closer and dropped behind some trees.

Seconds later the light reappeared from behind the trees, the boys described it as “a golden oval-shaped” object.

The scared group of teens began to run, but the mysterious orb appeared to follow them. When they moved the orb moved, when they stopped, the orb stopped. Then, once again the strange light disappeared behind the trees.

Then one of the teens, Mervyn Hutchinson, age 18, saw something emerge from the trees, the three others also soon spotted the strange creature. Hutchinson said the beast was human-sized, all black with large webbed feet and large bat-like wings. It also reportedly had no head.

The beast apparently looked like a headless bat that was approximately 5-feet tall, with large webbed feet and wings protruding from its back. In Hutchinson’s own words: “It didn’t seem to have any head. There were huge wings on its back… like bat wings.”

The Bat Beast launched itself into the air, flying over the boys heads.

The group of friends, understandably overwhelmed with terror and adrenaline, sprinted away from the freakish bat-thing and made their way to the nearest police station. Once there they related their tale to what one must assume were highly skeptical officers. Flaxton would later state that he had “felt cold all over” during the episode.

Less than a week later, on the 21st of November, a young man named Keith Croucher seemed to confirmed the teens claim of an unusual object soaring over Kent, when he announced that he too had seen a oddly shaped craft hovering over the local soccer field, not far from where Flaxton and his crew had claimed to have their curious encounter with a UFO and its bizarre occupant.

On November 23rd, a man named John McGoldrick went to Sandling park after hearing about the four teens strange report. While there McGoldrick found huge webbed footprints which were an amazing 24″ long and 9″ wide, as well as heavy brush that had been flattened to the ground.

McGoldrick returned to the park again on December 11th, this time with members of the media. They reported a strange atmosphere where the whole area seemed to be glowing, which apparently continued for days.

No explanation for the events at sandling Park has been found.