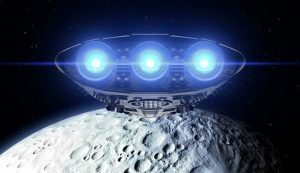 On the YouTube channel “Unidentified Aerial Phenomena” dedicated to the mysterious celestial anomalies, a very intriguing video appeared. It is reported that the video was received a couple of days ago by a video camera with a powerful lens aimed at a natural satellite of the Earth.

The unnamed ufologist does this almost every night in order to capture something interesting, and this time he is really lucky. The recorder recorded a UFO leaving the moon at a fantastic speed.

Look closely at the frames below carefully, and you will see a bright cigar-shaped object emerging from a large crater and rapidly sweeping away. UFO arises from one specific point and moves to the side – thus, we can conclude that this object did not fly near the Moon, but was originally on its surface.

The anomaly is perfectly visible against the blackness of the cosmos, and the trajectory of the object is perfectly straight.

Of course, many ufologists and ordinary web users thought that this was an alien ship taking off from the Moon. Conspiracyologists and UFO believers have long been saying that the nearest celestial body to us is a kind of transit point, which the aliens periodically visit.

Other researchers believe that the Moon is one giant base, within which millions of representatives of extraterrestrial civilization reside. And such a takeoff UFO – a common thing for them.