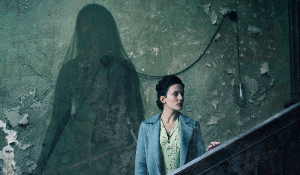 There is something about paranormal horror movies that moves a tremendously unique sort of fear into our hearts, and that probably has something to do with the fact that a lot of them are based on real events.

Almost all of the horror movies below were mildly scary in their own right, but the real life tales behind them are so much worse.

So, kick your imagination into overdrive and judge for yourself whether you find the movie of the word of mouth account spookie…

Although the crash that kills the protagonist’s wife in The Mothman Prophesies is fictional, all of the other seemingly outlandish events are based on real life events.

Between the years of 1966 and 1967, various people in Point Pleasant, West Virginia reported seeing an enormous moth-like creature hovering around the area.

One day, the bridge collapsed unexpectedly during rush hour traffic and killed 46 people. The Mothman was never seen again.

Father Gary Thomas was a real priest who served as an advisor on the movie, which is loosely based on his own story.

Thomas studied for 40 hours in Rome to become a Catholic exorcist and, despite an initial crisis in faith, he is adamant that he has “seen satan” and describes performing chilling exorcisms in great detail.

Below is an extract from his book about exorcising a young married woman named ‘Lisa’:

I felt a huge presence in the room. Her face started to distort, she started speaking in a language not known to me that she hadn’t been competent in before. She was hissing and spitting and exhibiting a serpentine look both in her body language and her face. She kept rolling her eyes. I laid my crucifix on her. She let out an incredible scream. I took my stole, which represents my authority as a member of the Catholic Church and as a priest, and I laid it on her. She slid out of the chair and on to the floor to get away from it. I said: ‘That’s enough for today.’”

The Haunting in Connecticut

The Haunting in Connecticut is based on the story of the Snedeker family who rented an old house in Southington, Connecticut in 1986. After the family had moved in with their four children, Carmen found tools used by morticians in the basement.

The family soon discovered that their new home had once been a funeral parlor, and if that wasn’t chilling enough, their eldest son also started to have terrifying visions.

Soon the other family members started having paranormal experiences, but things escalated drastically with both parents claimed that they had been sodomized by demons. Carmen also claimed that when she was mopping the kitchen floor, the water suddenly turned blood red and smelt of rotting flesh.

Eventually the family contacted demonologists who proclaimed the house was crawling with maleficent spirits and demons.

The family’s stories have been widely disputed, and it’s alleged that they fabricated their experiences for profit… Like selling their story to make this movie, for example!

This period horror story is based around the legend of the Bell Witch. The story that originated in Tennessee in the 19th century might be a folk tale, but it did result in a very strange event in American history.

For unknown reasons, a man named John Bell was chosen as a target to bear the full brunt of the Bell Witch’s malice.

After years of suffering inflicted on Bell by malicious spirits, including seizures, the farmer was eventually poisoned by a ghost.

Although Bell’s ailments were probably due to a misunderstood medical ailment such as epilepsy, his cause of death was officially deemed to be due to supernatural forces. John Bell is the only person in American history whose death was recorded as being directly caused by a ghost… Or was he?

No records remain from the era of the Bell Witch hauntings, and the tale is still important to paranormal researchers to this day. Paranormal investigator Benjamin Radford explains that:

It shows how easily legend and myth can be mistaken for fact and real events and how easily the lines are blurred.

The Possession tells the story of a girl who discovers a cursed box at a second hand shop, but after opening it, her behavior becomes uncontrollable and erratic.

Director Ole Bornedal cited the tale of the ‘dybbuk box’ as inspirational for the movie. Borrowing its name from a malicious spirit in Jewish folklore, the dybbuk box was a wine cabinet that was auctioned on eBay with an accompanying horror story.

According to the seller, the box was purchased at an estate sale in 2003. It had previously belonged to a Holocaust survivor who had escaped to Spain where she purchased the box before fleeing to America.

Although the box was a family heirloom, the descendants wanted nothing to do with it because they claimed it had a dybbuk living inside it and was kept stashed away in the sewing room away from the rest of the family.

Numerous owners of the box have reported that strange phenomena accompany it. The original seller reported that he experienced horrific nightmares when he was in possession of the box and that his mother suffered a stroke the day he gave her the box as a gift.

Every owner since reported phenomena such as loosing their hair, hives, coughing up blood and unexplained odors of jasmine flowers and cat urine permeating their homes.

The final owner consulted a Rabbi who resealed the dybbuk into it’s wine cabinet prison before it was buried in an undisclosed location where it remains to this day.

This story might just be an example of planting a seed or terror and allowing people to blame their ailments on the box, though it was later revealed the man who listed the dybbuk box was also a horror writer by craft…

The Suspicious Death of George Reeves: Who Killed Superman?