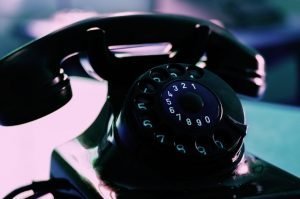 Is it possible to talk to and communicate with ghosts? There are those who claim to talk to the dead by telephone shortly after the person has died.

Imagine it’s a quiet evening. Earlier in the day a funeral was attended of a beloved family member. Suddenly, the telephone rings. Upon answering the telephone, the voice of the deceased loved one is on the other end. Sound like the opening of a scary science fiction movie? According to some people, phone calls from the dead are real.

While many people believe there is some form of life after death, it can become quite unnerving to receive a phone call from a dead loved one. Phone calls from the dead generally take place within 24 hours of a person’s passing. The voice on the phone, although recognizable, is often a bit garbled. Usually the phone calls are quick and end abruptly.

Why do spirits make phone calls? Many times it’s in an attempt to say goodbye. Other times it’s to get an important message across. From time to time these calls are used to warn someone of danger. They also take place around birthdays and holidays.

It’s interesting to note that phone calls from the dead not only come in on land lines, but, on cell phones as well. There are occasions when cell phones will light up and ring with a call from a deceased spirit, even when the cell phone isn’t turned on.

Phone Calls From the Dead

Different theories exist to explain this phenomena. One explanation is that spirits are able to manipulate energy and really do make the phone calls. Another explanation is that these calls are hallucinations and the actual phone call is unknowingly manipulated by the person receiving the call through psychokinesis, which is the ability to move objects with the mind.

Skeptics theorize that these occurrences are purely fantasy and that the person receiving the call is so overcome by grief, they temporarily can’t tell the difference between reality and fantasy.

Classifications of Phone Calls from the Dead

Parapsychologists D. Scott Rogo and Raymond Bayless wrote an excellent book about the paranormal phenomenon, phone calls from the dead, based on two years of research where they classified these calls.

Simple: These, the most common, are when the spectral caller says thirty words or less. Usually they’re brief because the caller isn’t responsive to the living. The caller may repeat a question or phrase, which is followed by silence.

Prolonged: In most of these calls, the living person doesn’t know that the other person has died. Conversation usually is normal with the exception that the deceased is disinclined to answer questions that state s/he’s dead. It’s theorized these calls are dependent on the living not knowing that the person is dead.

Apparent: The majority of these calls are when the dead calls the living who might or might not know the other person has died. The call can be simple or prolonged.

Answer: In rare cases, the living calls the dead, not knowing the recipient has died. The calls are generally prolonged.

Intention: A dead person is not involved. The living thought about making a phone call, but didn’t. S/he receives a call about the matter. The caller’s voice might sound normal, robotic or slurred. Sometime, a third party will call, relaying information from the caller.

There are cases when people answered phone calls and heard the voice from someone they knew had died. Others have received calls from a dead person and found out later the caller had died before the call was made. Rogo and Bayless documented these calls.

Phone Calls from a Dead Grandmother

Gran and Karl Uphoff were close. She was deaf, but called his friends to find out if he was there and, if so, to come home immediately.

Two days after she died, Karl was at a friend’s house when he was told he had a phone call. When Karl heard the caller’s voice, he realized she was Gran. Before he could ask her how she could call, she hung up. More calls followed before they stopped.

Phone Calls from a Dead Grandfather

In 1995, Mrs. Wilson’s phone rang. When she answered the call, she heard a distant voice that she recognized as her dead Granddad. He said he was fine and with others who had passed on. He told her he was watching over her and to give his love to the children.

His voice faded and the call disconnected. Wilson dialed a number to trace the call. The call originated from her own phone. There was no extension.

Cell Phone and Telephone Calls from the Dead

Chuck Peck was killed in the September 12, 2008, Metrolink train crash in Los Angeles. That night, his fiancée, brother, sister, sons and stepmother kept receiving calls from his cell phone. When they answered their phones, they heard static. When they returned the call, they got Chuck’s voice mail. The calls stopped around 3:30 a.m. – about one hour before firefighters found his body. Curiously, it’s believed that he was killed instantly.

Army guards stationed at Fort Leavenworth have reported receiving phone calls from Number Eight Tower when it was vacant, although no telephone was there. When they answered the calls, they heard static.

Telephone Call to the Dead

A woman dreamed about a friend she hadn’t seen in several years slipping into a pool of blood. She was very concerned and called her friend. The other woman answered and said she had been in the hospital, was discharged, but would be readmitted in several days.

She refused to let the caller visit and said she would call when she returned home. Finally, after not hearing from her friend, the woman called. A relative answered and said the friend had died six months before the initial phone call.

Is it really possible to communicate with spirits who have crossed over? Mediums claim to do it all the time. Scientific studies have produced a large amount of evidence that spirit communication is possible.

Logically, for a spirit to try to make contact with a person via a telephone makes sense as people are used to telephones as communication devices. It can also be a lot less unsettling for many people to only hear the voice of the deceased loved one, rather than see a full-blown apparition.

Can spirits really communicate with loved ones through the telephone? For those who have experienced this curious phenomena, the calls are real and provide a way to say a final goodbye to someone who has passed on.

Houska Castle: Haunted Fortress That Will Spook Your Socks Off