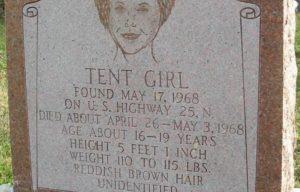 On May 17th 1968, Wilbur Riddle, who had been scavenging for glass insulators alongside U.S. Route 25, discovered the decomposing body of a young woman wrapped in a heavy green canvas tarpaulin, such as might be used to wrap up a tent.

A police investigation failed to identify either the deceased woman, or name any suspects in her apparent murder.

She was buried in the Georgetown Cemetery with a donated headstone that bore her likeness as it appeared in a police sketch of how she might have looked in life, with the inscription:

The grave site existed as such for over 30 years until in 1998, the Tent Girl was positively identified as 24 year old Barbara Ann Hackmann Taylor as a result of the ongoing efforts of Todd Matthews.

Matthews, was the son-in-law of Wilbur Riddle, who had originally found her body, and had maintained a longstanding interest in the case. He had collected information on the Tent Girl and combed through many missing persons reports on the Internet.

Matthews had discovered a report from the family of a young woman who had gone missing in Lexington, Kentucky in late 1967. He forwarded information on the Tent Girl to the Hackmann family.

The family believed that this was likely their missing relative, which led to the exhumation of the body and DNA testing, which confirmed her identity.

Thus, some 30 years after her death, the Tent Girl had finally got a name, and people now knew who she was and the life she had once had. She had married and had a daughter, she had a job, working with a carnival.

She had 6 siblings, but after her father and her brother were swept away in a flood and her mother could not take care of all six of the children, her mother made the decision to give them up.

They grew up and most of them stayed in contact with the others, but, none of them could find Bobbie. With the mystery of her identity solved the only thing left to figure out was who killed her. This remains a mystery, as her killer has never been brought to justice.

The family chose to have Hackmann’s remains re-interred in Georgetown Cemetery, with an additional stone base placed under the original grave marker, bearing her real name, nickname, date of birth, presumed date of death, and the inscription “Loving Mother, Grandmother & Sister”. No mention of her married name is made on the stone.

The prime suspect in the murder is Barbara’s husband, George Earl Taylor, who died of cancer in October 1987.