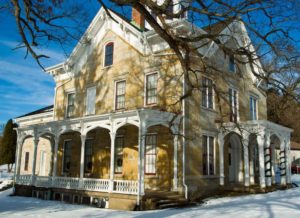 The Mathias Ham House was built in 1837 by Mathias Ham in Dubuque, Iowa. The house was a small two-story, five room structure for his wife and five children. More rooms were added on after the death of Ham’s wife, going from five rooms to twenty-three.

Mathias made his fortune in the mining, lumber, agriculture and shipping vessel. He would sit in the very top room of his house, keeping an eye on his ships. One day he spotted pirates on the river and alerted the authorities. As they were being arrested, the pirates vowed vengeance on him. However, when the day came, it wasn’t Mathias they found.

It was the end of the eighteen-hundreds. Every member of the Ham family had passed on except for one, Sarah Ham. She was one of Mathias’ daughters and the only one living in the house at the time. While she was reading in bed one night, she head someone moving around on the floor below her. She slowly made her way downstairs to investigate and found no one.

That night, Sarah heard the same movement below her. She called out to the person but received no answer. Locking herself in her bedroom, Sarah placed the lantern in the window and picked up her shotgun. She waited as heavy footsteps made their way to her. They stopped before her bedroom door. Sarah fired two shots.

Her neighbors arrived shortly after only to find a bloody trail leading down to the river. They found the pirate captain who had threatened Mathias dead on the river bank.

Today the house is a museum and considered to be haunted. Paranormal reports include unexplained lights, noises, cold chills, old broken pump organ plays on its own. Footsteps and voices are also heard. It is believed Mathias Ham and possibly the pirate captain are the ones responsible for the haunting.

“My husband and I were touring the Ham House. We made jokes to each other under our breath throughout the tour about it being haunted. The guide would not discuss it.

“As we were leaving, I was ahead of my husband exiting the gift shop, and I stopped to turn around and have a look st the house. As my husband exited the building, I saw the door fly from his grip and slam shut behind him with a BANG.

“There was no spring on the door, it was not a windy day. The type of motion was extremely eerie. I could tell immediately from the look in my husbands’ eyes that he was a big shocked at what had just happened. We scurried away & he confirmed it had felt like someone tearing the door out of his hand.”

Another visitor, Alissa, also has something to remember:

“I took a took of this and the tour guide swore up and down that the Mathias Ham house is not haunted what so ever. However, as I was walking through it with a friend of mine, we saw a little girl run down the hallway as we were going up the stairs…we were the last two in the tour group and the last tour of the day…”

Whatever it was, this house holds secrets.