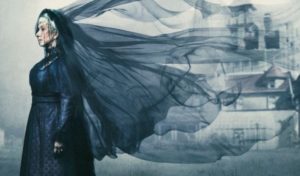 The story today tells of a goodhearted woman who was wronged by the one charged with her care and her revenge from beyond the grave. This is indeed a tale of one of the most justified hauntings by a ghost in North Carolina’s storied history.

It starts well before the Civil War when slavery was the norm. A plantation owner in Pender County had realized that one of his house slaves had grown too old for her duties.

‘Old Jo’ as she was known had been good to the family, helping to raise the children and take care of the house for as long as the master could remember. He felt an obligation to take care of her as she had taken care of him.

So he had a cabin constructed for her in the slave section and a slave named ‘Sissy’ was taken from the fields and instructed to help Old Jo with anything she needed.

Old Jo appreciated what the master did for her, but it wasn’t long before she discovered Sissy wasn’t exactly a hard worker. in fact, that girl did the bare minimum to get by. Instead of helping Jo she felt the old woman was a burden on her.

She would only get water when she was thirsty and Old Jo was fed only after Sissy had eaten all she wanted. The old woman would spend days in the bed developing bed sores because Sissy was too lazy to move her to a chair where she could see the sun.

Old Jo tried to get word to the master, but the family had gone away on a trip leaving the overseer in charge. Old Jo’s attempts to get word to him failed as well.

Friends would often stop by the cabin and talk with Old Jo who was not shy about telling of her feelings of Sissy to her guests. “If I were younger, I’d slap the life out of her.” She would tell her friends over and over.

One day Sissy was waiting at the edge of the field when the overseer rode up on his horse. Old Jo had died during the night. Crying, the young girl asked to be the one to lay out Old Jo for the funeral.

The overseer agreed thinking it was a sign of respect for the dead. What he didn’t know was that Sissy didn’t want anyone to know the level of neglect Jo had suffered.

The next morning the overseer was enraged to find Sissy not with the other workers. Pounding on the door to the cabin he demanded the girl return to the fields. When he got no reply he kicked the door down.

The sight that meet him was horrific. The girl was laying beside the door, dead. There was a look of terror on her face and her fingers were bleeding from where she was scratching at the door to get out.

Her face was bruised and both her eyes were nearly swollen shut. The overseer couldn’t understand how this had happened. There was no one else in the cabin and no sign of forced entry.

The overseer was stumped. The other slaves knew exactly what had happened. Old Jo had returned to make good on her promise to “Slap the life out of that girl”.