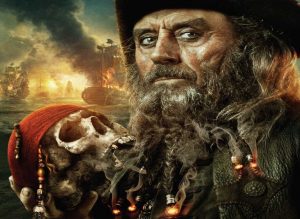 On Ocracoke Island lies a spot known as Teach’s Hole. This small inlet is reported to be the spot where the infamous pirate Edward Teach, better known as Blackbeard, preferred to anchor his ship. It’s also said to be where he met his end, and some say his ghost haunts the spot to this day.

Blackbeard was an English pirate who operated around the West Indies and the eastern coast of Britain’s North American colonies, roaming the seas from 1716 until 1718, and in doing so gaining a reputation for unbridled ferocity.

When Blackbeard went into battle, he strapped multiple pistols and multiple cutlasses to his body. Most frightening of all, he wove fuses into his long, black beard and set them on fire just before he stepped on to the captured ship.

This towering figure, armed to the teeth, with sparking, flaming beard must have been a terrifying sight to behold, and the sight of him smoldering along with several pistols and knives strapped to his waist was enough for many of his enemies to surrender without a shot being fired.

Blackbeard terrorized the sailors of the Atlantic and the Caribbean, not only ambushing ships and stealing their cargo, but killing those who opposed him, often attacking in the dim light of dawn or dusk when his ship was most difficult to see. He would often sail under the flag of a country friendly to the nationality of the ship he was attacking, and then hoist his pirate flag at the last moment.

Like many pirates they often attacked slave ships with human cargo. His trusted second in command, Black Caesar was a former black slave whose ship Blackbeard boarded and then freed all the slaves. Most pirate ships at the time freed African slaves, and many of these men then became a part of their crews.

He formed an alliance of pirates and blockaded Charleston’s harbour (Charleston was known as Charles Town at the time), when his men desperately needed medicine, and he kept a councilman and his young son hostage until a fully equipped medicine chest was delivered. He then ran his ship, the Queen Anne’s Revenge aground on a sandbar near Beaufort, North Carolina.

He briefly retired from piracy and settled in Bath, North Carolina, where he accepted a royal pardon and married the daughter of a local plantation owner.

But he was soon back at sea, where he attracted the attention of Alexander Spotswood, the Governor of Virginia.

Spotswood arranged for a party of soldiers and sailors led by Lieutenant Robert Maynard, to capture the pirate, and Blackbeard’s reign of terror on the high seas came to an end on November 22, 1718.

Maynard took command of the two armed sloops on 17 November. He was given 57 men, 33 from HMS Pearl and 24 from HMS Lyme. Maynard and the detachment from HMS Pearl took the larger of the two vessels and named her Jane, whilst the rest took Ranger, commanded by one of Maynard’s officers, a Mr Hyde.

Maynard surprised Blackbeard and a skeleton crew anchored at Teach’s Hole, and as Blackbeard was busy entertaining guests he had not set a lookout. In the ferocious battle that followed, Blackbeard and his entire pirate crew were all killed or captured.

One of Maynard’s ships stood between Blackbeard and freedom. Blackbeard sailed his ship – the Adventure – in towards shore. It looked like the pirate was going to crash his ship, but at the last second the ship eased through a narrow channel, and one of the pursuing Navy ships, the Ranger went aground on a sand bar when they tried to pursue the Adventure having taken heavy cannon fire. Mr Hyde, the ships Captain was dead and his second and third officers either dead or seriously injured. His sloop was so badly damaged that it played no further role in the attack.

Blackbeard fired his cannons at the remaining ship, the Jane, and as many as a third of Maynard’s men were killed or injured, the rest he ordered below the deck under cover of the gun smoke, hoping to fool the pirates into thinking they had won. When the pirates boarded the ship, Maynard and his men attacked the pirates.

Outnumbered, the pirates put up a bloody fight, and Blackbeard and Maynard came face to face. They both shot at each other, but whilst Blackbeard’s shot missed Maynard, Maynard’s bullet hit the pirate.

Blackbeard swung his cutlass and managed to snap off Maynard’s sword blade near the hilt. As Blackbeard prepared to deliver the death-blow, one of Maynard’s men cut Blackbeard’s throat from behind. Blackbeard’s blow missed its mark, barely skinning Maynard’s knuckles. Infuriated, Blackbeard fought on as the blood spouted from his neck. Maynard and his men rushed the pirate.

It took a total of five gunshots and about twenty cuts before Blackbeard fell down dead. Blackbeard’s head was chopped off and hung from the bowsprit of Maynard’s ship. His headless body was thrown overboard. Legend has it that the headless body swam around Maynard’s ship three times before sinking below the waters.

Ever since then, it’s been said that Blackbeard’s ghost haunts the spot known as Teach’s Hole. Many people have reported seeing a strange light moving beneath the water in the cove, and know it as “Teach’s light”. It’s said that this is Blackbeard’s spirit, swimming through the waters, searching for his missing head.

Sometimes, the headless ghost floats on the surface of the water, or swims around Teach’s Hole, glowing just underneath the water. Others state they have seen his ghost rise out of the water holding a lantern,and that he then walks ashore, but that his boots leave no footprints.

What’s more, on stormy nights it’s said that you can hear Blackbeard’s voice calling out in the wind. Many people have heard a horrible roaring coming from the wind on dark and stormy nights in Teach’s Cove, a roaring that sounds like someone bellowing “Where’s my head?”