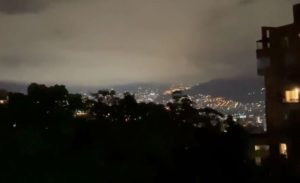 Once again people have heard strange jet-like sounds in the sky, but in all cases there were no airplanes. According to the latest reports and published by Linda Moulton Howe, a weird loud noise came from the sky over Medellin, Colombia on August 24, 2020, reports ufosightingshotspot.blogspot.com.

El Tiempo newspaper in Colombia, South America wrote: “What was the loud noise that caused terror in Medellin on August 24, 2020?”

The night sky was dark and cloudy. There were no aircraft visible while the strange and loud jet-like sound alarmed people and provoked social media comments about “ghosts to aliens from outer space” causing the scary night disturbance.

This is the fourth round of unexplained, bizarre sounds reported in Bogota, Colombia, since February 2020.

Colombia’s largest newspaper, El Tiempo, hypothesized that the explanation for the jet-like sound on Monday night, August 24th, might be a “cielomoto.” That Spanish word translates to “sky motorcycle or quake” in English.

Some scientists think that occasionally meteors coming in fast in the upper atmosphere can produce sonic frequencies of varying intensities. But that would not explain the hundreds of strange booms, metallic trumpet sounds, scraping metal and loud, invisible jet sound reports that have emerged persistently from around the world in both hemispheres since 2011.