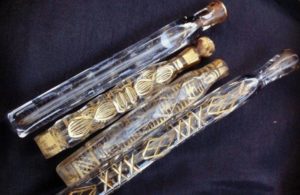 According to legend tear bottles were prevalent in ancient Roman times, when mourners filled small glass vials or cups with tears and placed them in burial tombs as symbols of love and respect. Sometimes women were even paid to cry into “cups”, as they walked along the mourning procession.

Those crying the loudest and producing the most tears received the most compensation, or so the legend goes. The more anguish and tears produced, the more important and valued the deceased person was perceived to be.The bottles used during the Roman era were lavishly decorated and some measured up to four inches in height.

In ancient Persia it is said that when a sultan returned from battle, he checked his wives’ tear catchers to see who among them had wept in his absence and missed him the most.

Tear bottles reappeared during the Victorian period of the 19th century, when those mourning the loss of loved ones would collect their tears in bottles ornately decorated with silver and pewter. Special stoppers allowed the tears to evaporate. When the tears were gone, the mourning period would end.

However, the truth is perhaps somewhat different as most historians and archaeologists believe that these so-called “tear bottles” contained oily substances, perhaps fragrant ointments used as libations or to anoint the dead. Oddly enough, this theory was known well before modern chemical analyses, but so ingrained was the idea that these ancient bottles were “tear catchers,” that people simply chose to ignore the facts and believe the romantic Victorian idea that they were tear catchers.

The myth likely began with archaeologists and an oddly chosen term. Small glass bottles were often found in Greek and Roman tombs, and early scholars romantically dubbed them lachrymatories or tear bottles.

Strange link between the human mind and quantum physics

Lost City of The Giants in the Jungles of Ecuador