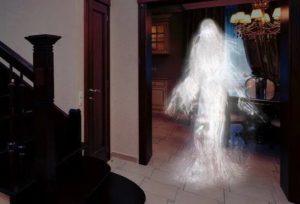 This is a true story of something that happened to me a while back.

I am 19 now and at the time of this incident I was 16. I never had believed in ghosts before nor had I ever believed in any type of superstition (luck, fate, etc.). So, when my friend started to tell me that his house was haunted I quickly started a bet to prove him wrong.

The bet was to spend the night in the house alone, just him and I. We would stay up for as long as we could without any lights, candles, communication, etc. It was about two weeks after my birthday so I had a lot of cash if I were to lose the bet.

It started out that we went to his house at about 3:00 o’clock in the afternoon. His grandmother(who owns the house) was visiting friends and relatives in Las Vegas. My friends aunt who was supposed to watch us was spending the night at her boyfriends house.

We had asked her to leave for the night. We gathered food and cards. We played a couple of games until it got too dark to see. Then, we just sat on the couches and waited. My friend kept trying to scare me by asking me if I heard anything yet.

I had not heard anything out of the ordinary until about 2 o’clock in the morning. My friend was already asleep and I was on my way to dreamland also. I was half awake when I heard the dog outside barking. I looked out the window to see if anything was there. Nothing…

I turned around just in time to see one of the chairs (which we had brought in from outside because of the wind) fly across the floor and hit my friend’s leg. He jumped up so fast he didn’t even see where he was going and ran into the door to the kitchen.

I could not see very well without any light but with the little light from outside and the glare from the stereo console I saw him reach down and start to touch his leg.

I was not supposed to bring a flashlight but I had sneaked on inside my backpack. I flashed it at his leg and there was blood everywhere. I was completely petrified. I ran over to him and tried to help him calm down. I ran to the kitchen and grabbed a box of light bulbs from under the sink.

While I was running back to the living room I felt a gust of very cold wind and the bulbs were knocked from my hand. They were the only two we had.

At least the only two that I knew of. I found my way back to the living room and saw my friend, bloody and all, sprawled out on the floor by the door and the front door open. I ran to his aid. Just as I got to him the front door slammed and the windows cracked.

The house was very old so it did not withstand very much pressure. We used the flashlight to guide our way to the next door neighbors and called my mother. She came to pick us up. We did not tell her of anything that had happened.

By this time it was about 3 o’clock. My mother works night shifts until 2:30. We told her that the power went out and we couldn’t stand it being cold. To this day I refuse to spend the night at his house let alone stay until nightfall. I could never figure out what happened and I don’t think I want to know.

He has told me that nothing has happened since then, which leads me to believe that the chair was probably meant to hit me.

As for my friend and him falling in front of the door, he said he opened the door and the wind pushed it open and with him only having use of one leg, it knocked him off balanced. Believe me or not that was the scariest time of my life… So far.