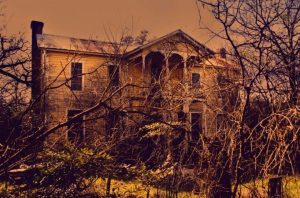 Anomalien.com reader Rick shares his story about an encounter with the unexplainable.

At times of emotional distress, a child’s experiences tend to remain etched in his/her mind, moreso than those of a more sheltered upbringing. I attribute the following story to this phenomenon because one might argue that there is no way that I could remember these events – that I was just too young.

Divorce is about the hardest trauma any child can endure. My parents’ divorce in 1973 brought my very early years to such constant crisis that every event that took place remains with me still, to this day. It was during this time that I had the following experience, an experience that helped me through one of the hardest periods of my life.

When I was 5 years old, and living with my young father in Aptos California, I spent a lot of time alone after preschool because he couldn’t afford a babysitter.

One soft fall evening, as I hung by my belly in my innertube swing awaiting my father’s arrival, I heard children playing in the trees at the edge of the property (we lived in a small house in the middle of a field, flanked by old-growth redwoods.) Disobeying my father’s orders to stay inside the gate until he got home, I took off across the field in hopes of meeting these happy children.

When I got to the trees, I saw two of the hippest looking boys I’d ever seen. I say this because they wore billowing white shirts, pants that went to the knees, and leather shoes with shiny buckles.

To me, they looked like “the Monkeys”, or like those fantastic “Three Musketeers” I’d seen on T.V. They were dripping wet, and had bits of what looked like moss here and there, clinging to their arms and legs.

They wore their brown hair in a “page-cut” fashion and had belt buckles that matched the ones on their shoes. When they saw me coming, they welcomed me immediately into their game of “let’s break the window” of the old woodshed where they were playing.

After I successfully bashed the window with a rock, they were so delighted with me, I was immediately invited home with them.

We embarked on a direct path, past an ancient cement pool, it’s water putrid with moss, past an old, leaf-covered tennis court, and on to a break in the woods revealing a huge three-story victorian manor.

Nickolie and Tucker were their names, as introductions commenced as we walked. Nick was the “elder”, being at least six or seven years old, and Tucker(who didn’t talk much) was just my size, probably four or five.

We entered the huge victorian, at which time, a game of hide-and-seek broke out. I was “it” and remained “it” for quite some time. It was baffling! There wasn’t a stick of furniture in the place to hide behind, and yet, as I ran from room to room, hall to hall, stairway to the porch after their giggles and footsteps, they were able to completely elude me.

It wasn’t until I gave up, standing in a room that had a strange contraption in it that Nickolie came out from hiding.

“Do you like our loom?” Asked Nick. “It’s our mother’s loom. Tucker ALWAYS hides here…” And out sprung Tucker, kicking and punching at Nick with all his little might. “That’s not fair, you told him!” he exclaimed, and they went scampering down the empty hall. Silence… “I must still be it,” I thought.

It was then that I heard my father’s signature whistle. He did it with his fingers and could be heard for miles. Or so it seemed.

I tried to find my new friends to say goodbye, but they wouldn’t heed my pleas to come out from hiding, and as my father’s whistles grew more frantic, I knew I had to leave.

I found my father walking toward me across the field as I broke from the woods, and he scolded me urgently for scaring him so. “But Dad”, I explained, “I was playing with the boys in the big yellow house!” “What big yellow house?!” he frowned. “The one over there, past the swimming pool!” I exclaimed. “Come on, I’ll show you, THEIR MOMMA HAS A LOOM!”

He reluctantly gave in to my tugs on his hand, and we set off through the woods to the big yellow house. But when we arrived at the clearing, to my father’s shagrin, there was no big yellow house. Instead, in its place there lay an ancient concrete slab, and the ruins of a large fireplace.

“This can’t be it!” I insisted, and I was sure that if we looked hard enough, we would find it! But he was right. There was no house, and it was time to go home and make dinner.

As we passed the ancient cement pool on the way home, Father warned me of it’s hazards. “They say two little boys drowned in that pool, not much older than you… a long, long time ago.”

The very next day, I heard Nickolie and Tucker giggling in the woods again. I gave chase, careful to remember to be home before my father found out. I found them at the cement pool, pretending to go fishing with sticks for polls. We went to the clearing, and, of course, there stood the big yellow house, plain as day!

I met them every day after school by the pool, and I was always home before my father found out. We played for hours in a house that was absent of furniture, and vacant of grown-ups.

This continued until I moved away to live with my mother.

I fondly remember Nick and Tucker, and I’ve often told the story to family and friends. I truly believe that I am very lucky to have experienced a thing such as this. I hope you enjoyed the story.