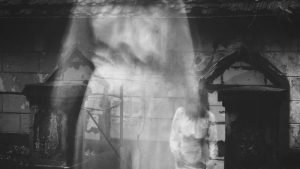 The White Lady’s appearance was an omen of impending tragedy for the Hohenzollern dynasty for centuries in this well documented case. Who was she in life?

The House of Hohenzollern was a wealthy, powerful dynasty that ruled Prussia, Romania and Germany in the Holy Roman Empire for four hundred years. They were Electors of the Empire, emperors and kings.

The spectral White Lady appeared as sad, tall, thin and regal. She wore flowing white robes and carried a large group of keys, which were alleged to open every door in the Hohenzollern’s castles.

The first documented encounter with the White Lady was in 1619. Allegedly, three young pages saw her in a castle hallway. One tried to stop her, by asking where she was going. She struck the lad on the head with a large key, which killed him. The other pages let her pass. Elector John Sigismund died the next day.

In 1628, the specter was said to have spoken for the first and only time. She said, “Veni, judica vivos et mortuos,” Latin for “Come, judge the living and the dead.” A young prince of the House of Hohenzollern died shortly after her appearance. In 1678, the White Lady appeared again. Margrave Erdmann Philip soon had a fatal fall from his horse.

Although the White Lady never appeared to Frederick the Great of Prussia, it’s alleged that, after his death, he appeared to his nephew to warn him about her. In 1792, Frederick William II and his army were camped outside of Paris, intending to capture the city.

The eve before the battle, he went to the wine cellar to select a bottle and his uncle’s ghost appeared. He told Frederick II to call off his troops, lest he see the White Lady. The nephew and his army quickly departed from France. The spectral White Lady’s appearance presaged the deaths of Frederick William III in 1840 and Frederick William IV in 1861.

The last reported sighting of the White Lady was in 1914, immediately prior to the assassination of Archduke Franz Ferdinand which triggered World War I.

Bohemian historian Balbinus reported that she was a woman named Perchta von Rozmberk or Rosenberg. Her father was Ulrich the Second, ruler of part of Bohemia. In 1449, she married John of Lichtenstein for political and financial reasons.

Ulrich neglected to pay Perchta’s dowry and John took it out on her. She told her father about John’s deplorable behavior and asked to be rescued. She had to beg her mother-in-law for food, her husband’s family fought constantly and John refused to have anything to do with her. He, alternately, snubbed her in front of the court and beat her. Ulrich accused Perchta of causing her predicament by not being loving enough.

Finally, the dowry was paid and Ulrich died. Perchta’s brothers brought her back to the ancestral home. John was believed to have been Hohenzollern relative. After her death Perchta haunted the dynasty as the White Lady for revenge against her in-laws.

The December 20, 1914 issue of The New York Times had an article about the dynasty’s specter. Agnes of Orlamonde and Bertha von Rosenberg, both of whom, according to legend, killed their children to marry the men they loved, are the candidates.

Agnes wanted to marry Albert of Nuremberg, but he said four eyes separated them, referring to his parents. She thought he meant her two children. She killed them in 1300. There are no details about her death. In 1598, her ghost appeared to King Albert Frederick in Berlin. He went insane.

In 1619, she manifested herself as rocking Prince Albert’s cradle. The key to the Castle of Orlamonde hung from her girdle. Within two weeks, King Sigismund died unexpectedly.

Agnes’ specter appeared in 1688 before the death of Elector Frederick Wilhelm, 1867, prior to George Wilhelm’s death, and in 1879, before the demise of Prince Waldemar. In 1887, the White Lady presaged the deaths of one of the Grand Duke’s of Baden’s sons, Queen Marie, Emperor William and three unnamed others.

Bertha was accused of killing her children because she wanted to marry a prince. She was buried alive and doomed to stay earthbound forever. According to another legend, she left an annual gift for the needy, which was discontinued a few years after her death. She appeared on the anniversary of the date the gift was to be given. No dates are given that connect her with impending doom.

Hohenzollern’s White Lady and Other Omens of Doom

The dynasty isn’t the only family that’s plagued by an omen of impending doom. The royal Hapsburgs’ death omens were turnfalcons (ravens) and a White Lady. Turnfalcons were also sighted before Archduke Franz Ferdinand’s assassination and other deaths.

The Celtic Bean Sidhe, pronounced “banshee,” is a death omen for more than one family. The Welsh, English and Irish portents of death are phosphorescent corpse lights.

Some spectral Grey Ladies, who wear colors other than grey, are harbingers of impending disaster or death. After the Hohenzollerns were forced to abdicate, there have been no more documented sightings of the White Lady, although members of the former dynasty are still alive.