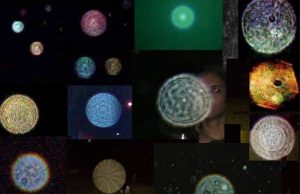 Orbs. Perhaps you’ve seen them. They are often unexpectedly captured in photographs as translucent or even solid spheres of light. Sometimes they appear as blurs, streaks or other anomalies. Alone or in groups, they usually appear white or gold, but can come in any conceivable color. Often written off as dust particles or moisture on the lens, there is much debate over these strange and interesting objects.

Am I Seeing Things?

At first glance, you may question your eyes when viewing a photo containing orbs. Your first inclination may be to zoom in on the picture or check your computer or camera screen. Next you’ll likely blink a few times and take another look. If you wear glasses or contacts, you will probably make sure there are no smudges or other obstructions on your lenses.

Aside from orb appearances as spiritual events, you often see them in photos of nature, individuals and areas noted for paranormal activity. Some consider orbs to be spirit guides or guardian angels.

You’ll check the photo again and yes—those pesky patterns are still there. At this point you’re starting to question what the heck is going on. Don’t worry, you are not seeing things and it’s no sign of delusion.

Mention orbs to anyone in the general population and you will likely encounter a fair number of skeptics. According to many scientists and photographers, orbs or backscatter are a common occurrence, especially when using today’s modern compact digital cameras.

A condition of low light where flash photography is used is often the culprit. Interference from moisture, water droplets and dust particles can also show up as an orb or some other anomaly. Finally, ultra compact cameras often have the flash located fairly close to the lens also resulting is these distortions.

The Scientist Who’s No Skeptic

While all these explanations sound plausible, is that all there really is to the orb story? If you think so, then consider this. Klaus Heinemann, a research professor at Stanford University who hold a Ph.D. in experimental physics from the University of Tubingen, Germany, has been studying the orb phenomena for quite some time. Quoted on greatmystery.org, he had this to say, “ There is no doubt in my mind that the orbs may well be one of the most significant ‘outside of this reality’ phenomena mankind has ever witnessed.”

His research involves taking photographs at various spiritual events known to result in the manifestation of orbs. He has literally poured over thousands of photographs to understand these mysterious spheres of light. He has even conducted experiments to produce “fake” orbs caused by conditions of moisture and dust particles. So apparently there is more to orbs than just “camera tricks.”

According to Heinemann’s research, he has noted that photographs taken at spiritual retreats or similar events result in the greatest number of orbs captured by the camera. He continues to test his hypotheses, but is pretty well convinced that orbs are emanations from various spirits and spirit beings.

Ask those in the spiritual and metaphysical community about orbs and you will get similar answers. Aside from orb appearances as spiritual events, you often see them in photos of nature, individuals and areas noted for paranormal activity. Some consider orbs to be spirit guides or guardian angels.

Others, particularly those among ghost hunters, consider orbs to be the spirits of departed souls who chose to remain behind on the earthly plane, rather than journey to the spirit world. Most likely they are all right—orbs could be any of these emanations.

There are plenty of phenomena in this world that cannot be perceived by the five senses and orbs are just one of them. While it’s easy to discount such occurrences as mere technical difficulties, there is truly more than meets the eye! So don’t necessarily assume it’s a delusion or optical illusion when it could really be spirit signals.