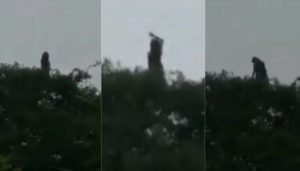 A disturbing piece of video from Colombia seems to capture a wailing woman apparently standing on top of a tree and some believe she might be the legendary’ La Llorona.’

The odd scene was allegedly shot at some point last month in the town of Monitos and soon after Christmas became something of a viral sensation in the region.

Although the details associated with the video are scarce at best, one story that was attached to the incident is that residents of this neighborhood are afraid to leave their homes due to ghost sightings.

Specifically, it was argued that the being in the video is a terrifying figure from Latin American mythology known as La Llorona or ‘The Weeping Woman’.

The lore states a woman was unloved by her husband and her husband loved their two sons instead of her. She caught her husband with another woman and drowned her sons in a river.

Out of grief and anger she then drowned herself. She was refused entry to heaven until she found the souls of her two sons. She cries and wails and takes children and drowns them in the river she and her sons drowned in. The legend represents La Llorona as a person or ghost.

Like many a video of possible paranormal phenomena going viral here in America, the reaction to Colombia’s spooky footage was generally mixed.

Is it a real La Llorona sighting or just a woman standing on a mountaintop?