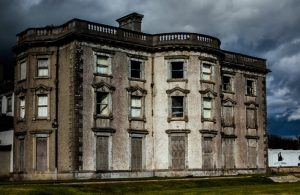 Situated in the south east of Ireland not far from the historic town of Fethard-on-Sea lies the Hook Peninsula. A rugged outcrop of land clawing its way into the Atlantic Ocean.

Famed for its wild beauty and being the home of one of the oldest lighthouses in the word Hook Peninsula also known as ‘Hook Head’ attracts over 150,000 visitors per year. But one area of ‘Hook Head’ lays untouched by the tourist industry today.

This place is Loftus Hall – a large 9 bay mansion house set on 63 acres of forgotten farmland in the heart of the Hook Peninsula. The history of this eerie abode begins around 1350 when it was built by the Redmond Family.

The House, then called ‘Redmond Hall’ was one of the finest houses in the Hook area. The house remained in the Redmond’s possession until it was confiscated under Cromwellian law in 1649. It was in 1650 that the house was taken over by the Loftus Family thus gaining itself the name ‘Loftus Hall’.

Today the hall is known worldwide for its ghostly tales and ominous past relating to the Tottenham family who came to live at the mansion in the middle of the 18th century. The house came into the Possession of Sir Charles Tottenham through his marriage to Anne Loftus, 1st daughter of the Viscount Loftus however his wife sadly passed in November 1768.

Charles Tottenham soon married again and came to take a long stay at the hall with his new wife and daughters Anne and Elizabeth from his previous marriage. It was during this stay that the lives of the Tottenham family would change forever.

Our tale begins with the arrival of a strange ship to the Hook peninsula one evening. The weather was bad and the ship was forced to moore for the night to find shelter and safety.

The Tottenham family were safely tucked away inside the comforts of Loftus Hall, entertaining guests and playing cards in one of the reception rooms. During the card came a handsome young stranger approached the house looking for comfort from the storm. He was taken in by Charles Tottenham and given dry clothes and invited to join in the game of cards.

During The game Charles Daughter Anne took an interest in the young man and began to acquaint herself with him. Anne was strong minded and insisted that she too be included in the card game even though it was highly improper for young ladies of Anne’s breeding to do so.

The young couple grew more and more comfortable in each others company as the evening drew on well into the night. The couple became tired and too warm so they removed their shoes to release some of their warmth.

Approaching the midnight hour Anne accidentally dropped one of her cards under the table. Without hesitation she bent down to retrieve the card but was terrified to find that instead of the feet of her young stranger she saw the two cloven hooves of the devil. Anne screamed in fear and recoiled from the young man who burst into a fit of rage at the ladies disgust.

Such was his rage that the devil encased himself in the flames of hell and shot through the ceiling of the house and into the darkness of the night sky. In his wake the man left a hole in the ceiling that could never be properly repaired until the original house was demolished in 1870/1871.

Anne fell ill after the incident and was taken to her favourite room in the house ‘the tapestry room’ where it was said that she went into recluse while she waited and pined for her young lover to return. Anne died in 1775 but it is unknown if she died in her beloved tapestry room.

There are many different theories on this story today. Some people truly believe that the devil did visit the hall on that night and left behind his spirit to terrify occupants for centuries afterwards.

However a much more probable theory on the subject would be that Anne and the young stranger were found together in a state of undress (without their shoes) and perhaps even in each others embrace which would have enraged Anne’s father.

The young man may have fled from the house at Charles Tottenham’s request or he may have been challenged to a duel and subsequently killed by the girl’s father sending Anne into a downward spiral, which would ultimately end in her death.

There is also another layer to this story; some people believe that Anne was found to be pregnant by the young stranger, which would also account for her illness after the loss of her lover.

It is also believed by some that the Tottenham family created the story of the devil themselves to save face in the public eye and draw away from the shame that a pregnant daughter would have brought to the family name. Nevertheless all of this is still only conjecture.

Anne’s death sparked a whirlwind of paranormal activity throughout ‘Loftus Hall’. Servants would see a ghostly apparition of a young women who they came to know as ‘The Mistress Anne’ wandering the corridors at night, before retiring to her tapestry room before dawn. Many servants were so terrified of this that they left the house, too afraid to remain.

The apparition however was not always peaceful and was said to terrorise any guest who was brave enough to sleep in her tapestry room. One account of this comes from a young man who came to stay at the house with a small hunting party in the 1860’s.

On the first night of his stay he retired to bed after indulging in a tipple with his companions. Only a few short moments past before he fell soundly asleep but was awaked in the night by the opening of his door and to his surprise a beautiful young lady stood at the end of his bed.

The lady stared at him for a moment then turned and entered the closet in the corner of the room. The man though it must have been his companions playing a prank on him so he decided to let it pass and returned to sleep.

The next night the young man returned to his room and began to clean his gun after his long day of hunting. As he was sitting on the bed the young lady entered and crossed his room again and returned to the closet as she did the night before.

The young man tried to engage the lady in conversation but she did not respond. Her dress was made of brocade silk in a strange old-fashioned style yet the strangest thing of all was that the lady did not open the cupboard door to enter but simply walked straight through as if she faded into thin air.

This frightened the young man so he decided not to investigate but to climb into the safety of his bed.

That night was not a restful one. While tucked beneath his sheets, terrifying growling and snarling sounds surrounded the man, as if a monster had been loosed in his chamber. The sheets were pulled from the bed and the curtains torn from the windows.

The young man reached for his gun and shot into the room but there was nothing or no one there. He fled from the room and would not return.

On questioning the servants of the house the next morning about what happened he was greeted by a cold reception. The man was told that he had made acquaintance with ‘Mistress Anne’ and that he should leave well enough alone. Later that day the young man left the house never to return.

The ghostly goings-on continued at Loftus Hall until Father Thomas Broaders a catholic priest local to the area exorcised the building at the family’s request. It is believed that many of the evil spirits that had attached themselves to the house were banished by Broaders but Anne’s Spectre could only be confined to the tapestry room.

Father Broaders died in 1773 and was buried beneath a gravestone that is said to read:

“Here lies the body of Thomas Broaders, who did good and prayed for all, and who banished the devil from Loftus Hall.”

The Building that looms over the Hook Peninsula today was built in 1871 by the Marquess of Ely so there is very little chance that these tales of terror are still occurring, however much of the Halls horrific history has attached itself through rumour and conjecture by the local people to the new building making it Wexford’s most Haunted site to date.