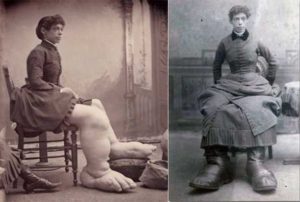 Fannie Mills was born in 1860 in Sussex England, and was raised near Sandusky, Ohio, after her parents emigrated to America. At a very young age she began to have painful symptoms of Milroy’s Disease. Milroy’s disease is a familial disease characterized by lymphedema (painful swelling and fluid building), commonly in the legs, caused by congenital abnormalities in the lymphatic system.This is an extremely rare genetic disorder in which an overwhelming number of sufferers are female.

As a young adult, Fannie was described as being a petite woman, weighing in at about 115 lbs, yet her legs and feet had swelled to an enormous size. Her feet grew to be about nineteen inches long and seven inches across. Her custom made shoes were a size 30, and were made from three goatskins, and she had to use pillowcases as socks. As you can imagine she found walking to be very painful and couldn’t do it unassisted.

In 1885, Fannie joined the travelling “freak show” circuit under the name of “The Ohio Big Foot Girl”, and was accompanied by a nurse called Mary Brown, who helped her to walk and with her day to day tasks made difficult or impossible by her disability. She earned about $150 a week in wages, a small fortune at the time.

Fannie’s promoters came up with a rather strange “gimmick” by saying that her father was offering a dowry of $5000 and a farm to anyone who would marry his unfortunate daughter, (despite the fact that Mr. Mills was now deceased and never owned a farm!) Fannie had plenty of offers on this fake promotion concocted by her promoters, mostly by people wanting the cash and farm.

The promotion proved successful though as droves of bachelors came out to the show to take a look at Fannie, all paying an admission fee to see her. She respectfully declined these offers, and went on to marry William Brown in 1886, the brother of her nurse Mary, who didnt require any enticement or financial reward to marry her, Mary was 26 and William 46 at the time.

Sadly she gave birth to a stillborn baby in 1887 and her health began to fail. She was forced to retire in 1892 due to her declining health and died in 1899 at the age of just 39.
Her funeral was reported as being well attended, with services being held at the family’s home, and private burial at Oakland Cemetery.