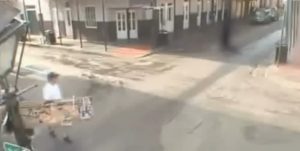 This online video is making the rounds on Video Hosting Sites. It shows a street corner in New Orleans as captured by one of the many street cams. In the top of the frame, a blurry black figure is seen clearly moving across the street. Many on the web are pointing to a ghost, demon or shadow people.

In 2006, I was on the phone, when from the corner of my eye I saw a black shadow go by really fast, it seemed like it went through my kitchen door that led to my garage because the door made the noise as if it was moved, It didn’t “hit” me until my granddaughter who was on the kitchen table coloring said “someone went out the door” I will never ever forget that experience, to this day I get chills thinking about it!﻿

A shadow person is the perception of a patch of shadow as a living, humanoid figure, particularly as interpreted by believers in the supernatural as the presence of a malevolent entity.

What can it be?