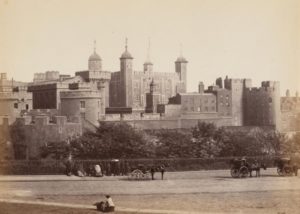 The Tower of London is often identified with the White Tower, the original stark square fortress built by William the Conqueror in 1078. However, the tower as a whole is a complex of several buildings set within two concentric rings of defensive walls and moat.

The tower’s primary function was a fortress, a royal palace, and a prison (particularly for high status and royal prisoners, such as the Princes in the Tower and the future Queen Elizabeth I). This last use has led to the phrase “sent to the Tower” (meaning “imprisoned”).

It has also served as a place of execution and torture, an armoury, a treasury, a zoo, the Royal Mint, a public records office, an observatory, and since 1303, the home of the Crown Jewels of the United Kingdom.

Ghost sightings at the Tower have been happening since the mid-13th century, and many of these spirits are pure royalty. The ghosts of princes, queens, countesses, children, and many others have been seen, felt, or heard over the centuries by the Tower’s Yeoman Warders and its visitors.

The Tower’s earliest, central structure was built by William the Conqueror of Normandy, between 1066 and 1067 C.E. King William I chose the site along the shores of the River Thames and built the initial structure into the southeast corner of the Roman city walls.

By the late 1070s, the White Tower was completed by Norman masons and Anglo-Saxon laborers. It was the tallest building in London for many centuries. This fortress has served vitally important roles to Britain ever since, including a royal palace, an armory, a prison, the central stage of executions in London, a mint, and home to the Crown Jewels.

Over the next 480 years, expansion projects by various kings would include building curtain walls featuring towers with names such as Byward, Beauchamp, Devereux, Bloody, Salt, Lanthorn, Martin, Flint, and several more.

A great moat around three sides of the complex connected to the Thames, and a wharf separated the moat from the river. Inside the walls of the fortress, barracks, stables, the Jewel House, and a formal housing facility called the Queen’s House were built.

When a visitor steps into the Tower of London today, they step into a millennia of British history. The dark, foreboding castle walls rise around each visitor, and considered by many to be the most haunted on Earth.

Lower-class criminals were usually executed by hanging at one of the public execution sites outside the Tower. High-profile convicts, such as Sir Thomas More, were publicly beheaded on Tower Hill.

Seven nobles (five of them ladies) were beheaded privately on Tower Green, inside the complex, and then buried in the “Chapel Royal of St. Peter ad Vincula” (Latin for “in chains,” making him an appropriate patron saint for prisoners) next to the Green. Some of the nobles who were executed outside the Tower are also buried in that chapel.

The names of the seven beheaded on Tower Green for treason alone are: William Hastings, 1st Baron Hastings (1483)Anne Boleyn (1536)Margaret Pole, Countess of Salisbury (1541)Catherine Howard (1542)Jane Boleyn, Viscountess Rochford (1542)Lady Jane Grey (1554)Robert Devereux, 2nd Earl of Essex (1601) George, Duke of Clarence, the brother of Edward IV of England, was executed for treason in the Tower in February 1478, but not by beheading.

With so many famous executions at the Tower, some of the historically obscure ghosts also seem to want recognition. Yeoman Sergeant Phil Wilson, a Yeoman Warder is a full-time resident of the Tower since 1996. Wilson is also the resident expert on the ghost legends.

To become a Yeoman Warder at the Tower of London, one must have served in the armed forces for at least 22 years, reached the rank of staff sergeant or higher, be a recipient of the Long Service and Good Conduct medal, and have a character reference of “exemplary” when they leave the service.

After that, an interview process determines who will make the cut into this elite group. There are currently 35 Yeoman Warders in the world, and these Warders have overseen the Tower of London for many centuries.

The Beefeaters, as they came to be called informally, started as bodyguards for King Henry VIII, in 1485, and they can be spotted in their scarlet and gold dress uniforms or their more dressed-down scarlet and blue uniforms.

Wilson and his wife have lived in Beauchamp Tower since they first moved into the Tower of London, and though Wilson doesn’t consider himself a believer in ghosts yet, he is very well-versed in the ghostly legends of the Tower, and he has had a few unexplained personal experiences himself.

Yeoman Warder Wilson first came to the Tower when he served guard duty in 1967. He said, “In 1967, the Tower was a very different place. There weren’t the lights around the area; it was quite a scary place.”

Before serving guard duty, and before military service, Wilson heard about the ghost stories in the Tower of London when he was a child. He heard about the story of Queen Anne Boleyn from the 1935 song, “Anne Boleyn,” by R.P. Weston and Bert Lee. The chorus of the song goes,

Anne Boleyn was the second of King Henry VIII’s six wives, and they were married in 1533. Henry VIII plotted against his wife and had her investigated for infidelity and treason. She was found guilty and executed at the Tower of London on May 19, 1536.

She is one of the most persistent ghostly figures seen there, according to literature published by the Tower. The headless female figure of Anne Boleyn is occasionally spotted drifting from the Queen’s House within the Tower walls, across to the Chapel of St. Peter ad Vincula. She’s said to lead a procession of dignitaries down the aisle to her final resting place under the altar.

One of the more gruesome haunts is that of Margaret Plantagenet, the Countess of Salisbury. Henry VIII didn’t agree with Margaret’s staunch Roman Catholic beliefs and viewed her as a political threat.

She was 68 years old when Henry VIII ordered her head to be placed on the chopping block at Tower Green. On May 27, 1541, the Countess of Salisbury refused to put her head on the block like a common traitor, and ran from the executioner who hacked her to death with his axe. Witnesses have seen the act replay itself in the Green, and others have seen the shadow of the axe fall on the nearby stone wall.

On July 17, 1674, some workers were dismantling the staircase of the White Tower for a reconstruction project, when they discovered two small skeletons.

In Alison Weir’s book, The Princes in the Tower, she says, “It was immediately assumed that these were the bodies of the Princes in the Tower. An anonymous eyewitness wrote: ‘This day I, standing by the opening, saw working men dig out of a stairway in the White Tower the bones of those two Princes who were foully murdered by Richard III. They were small bones of lads in their teens, and there were pieces of rag and velvet about them.’

They were, he adds, ‘fully recognized to be the bones of those two Princes.’” The two Princes were 12-year-old King Edward V and his 9-year-old brother, Richard, Duke of York. The two boys were murdered under suspicious circumstances in 1483.

One story says it was Richard III who plotted the murder, while others say it was Henry Tudor (who would become King Henry VII) who ordered the deed done. Regardless, the elder boy was stabbed to death while his brother was suffocated with a pillow.

Their bodies were hidden—buried near the foundation of the White Tower. The Princes have been spotted in the Bloody Tower wearing white nightgowns and holding hands. They never make a sound and can only be seen for a few fleeting moments before they fade into the stonework.

Sources: The World’s Most Haunted Places by Jeff Belanger; en.wikipedia.org/wiki/Tower_of_London