There are several examples of the Mysterious Hole that have appeared in the USA, in remote parts of Russia, and recently in Guatemala. From the end of 1980s a strange phenomena is happening in some Russian forests. In the case of Russia, the holes have been found in at least three regions: Ryazan region, Kaluga region, and Krasnoyarsk region. In the Ryazan region, the phenomenon of the Mysterious Holes occurred at least ten years ago. People find strange, deep holes. 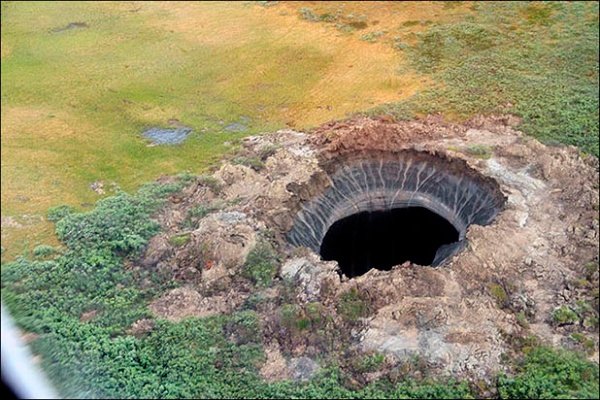 They appear in the dense forest, in the places you can’t get on the car or truck to bring any device to drill the ground. There is no any soil [sic] that should be taken from such deep holes is found.

In Siberia, human groans heard from a super deep hole drilled on a plateau between the Aral and Caspian seas were recorded and sent to the Soviet Academy of Sciences for further studies. But researchers did not take the mystical phenomena seriously, and the record was lost.

Almost all religions of the planet say that there is some underground realm. At that, each religion has its peculiar description of the realm. Some elements of the description however are typical of all religions.

First of all, the population of the underground realm consists of ‘masters’ and people who get there after their death. Second, people get under the surface in the form of shadows, souls and others known today as clots of information and energy fields.

Third, the ‘masters’ and sometimes the souls posses unique information about the past and even about the future. To obtain this information one has either to send his soul to the underground realm like Siberian shamans do, or help the shadows become visible and audible for some time. In ancient Greece there were special rituals involving obligatory blood shed.

Esoteric experts state that the bloody rituals were first of all connected with the unique energetic and informational saturation of blood. Attempts to obtain the information possessed by the ‘masters’ of the underground world were taken in all epochs and even in the modern time.

Russian researcher Nikolay Rerich was the first to organize an expedition to the legendary area of Shambala inhabited by wise ‘teachers’ and concealed from people’s eyes under the Himalayan Mountains.

He successfully conducted the expedition and brought a message from the ‘teachers’ especially for the Soviet Government. Gleb Bokiy from the People’s Commissariat of Internal Affairs (earlier the All-Russian Extraordinary Commission) also planned an expedition to the mysterious Shambala. The preparation was controlled by the Commissariat Head Felix Dzerzhinsky.

When the latter died financing of the project was stopped. It is known that Germany’s Waffen SS of the Third Reich also organized expeditions to Shambala. The structure and objectives of the organization resembled so much those of the mystical orders that existed in Germany before WWII.

The organization, as well as the orders, wanted to keep it secret that creatures with superhuman power existed deep under the surface.

The creatures employed meditation and self-discipline to gain power over the natural phenomena and attain the level of Gods. When Adolph Hitler, who as some researchers believe possessed extrasensory capabilities, came to power he supported the idea of a Hollow Earth and even made it official.

Russian researcher of the occult magic of fascist Germany Sergey Zubkov states that race clearing in the Third Reich and organization of secret societies were meant to help the mysterious ‘masters’ out from under the surface for active participation in reorganization of the world.

SS even had a special structure for collecting mystical information of the secret societies that at that time existed in Germany and employed the information for researches aimed to create a mystical weapon for solution of war problems. The organization sent expeditions to Tibet and the Himalayas.

The first expedition searching for Shambala started in 1931. The expedition failed to discover the way to the underground world but it brought lots of Tibetan manuscripts to Germany which proved that the ‘mysterious’ masters actually existed under the surface.

Later, the organization sent even more expeditions to the area. Who are the mysterious creatures living under the surface and where could they come from? President of the Association of Engineer Biolocation Vladimir Khlopkov is absolutely sure that some sentient beings live under the surface. Ten years ago, he conducted some kind of a brain storm of the planet’s interior.

Khlopkov explained it was a strong intellect but alien to humans. It is clear that albuminous bodies cannot survive under the huge pressure of rocks and terribly high temperatures under the surface.

It is highly likely that the discovered intellect is concentrated in some informational and energy clusters. Later, Vladimir Khlopkov discovered several places on the planet’s surface where the intellect probably got out on the surface.

One of the areas was in the town of Zelenograd very close to Moscow. Biolocation operators came across strange formations there during ground tests and at first called them “traces of UFO landing”.

When studied closer the traces revealed coincidence with a deep break that geophysics also discovered there. Every evening operators observed a strange biological field creep out from the break and move at a speed of 90 cm per second towards Zelenograd.

Little by little the field filled up the whole of the town. In some time, the field began to withdraw at the same speed back to the deep break. The entire of the cycle took about 3.5 hours. Khlopkov said that the field was reading the information in people’s memory.

In the Russian republic of Khakassia, there is the Kashkulakskaya Cave, the name means ‘the cave of a black devil’, in the Mountains of Kuznetsky Alatau. For many years, researchers from the Novosibirsk Institute of Clinical and Experimental Medicine of the Academy of Medical Sciences regularly came to the place to study the strange phenomena that occurred to people staying in the cave for a long period of time.

Visitors of the cave were at regular intervals gripped with horror that made them rush to the exit. At that, those people had optical hallucinations that were the same with all people: they saw an elderly man wearing a shaggy horned cap and with his eyes sparkling.

Researchers fixed high-precision magnetometers and other appliances outside and inside of the cave; they compared the indications of the devices with the emotions experienced by people in the cave.

It turned out that bursts of a higher magnetic field fixed with the devices coincided with the moments when people felt nervous. At that, devices fixed outside the cave precisely on its outline registered no changes at the time when there was a magnetic storm inside of the cave.

Some researchers participating in the experiment supposed that they came across some kind of a radio-range beacon complying with a strange program and sending signals vertically up, right into the cosmos.

May it be so that the mysterious creatures living under the surface came from the space and used the signals for communication with other beings that stayed there in their home?

In Kaluga region (Russia), a shepherd Pyotr Malinkin took his cows out to the pasture as usual. Having gone five kilometers into the field the man was shocked to find a huge hole in the ground six meters in diameter.

The pit was not on the spot the day before, it appeared overnight. The shepherd said the animals were scared to approach the hole, they did not eat the grass nearby. Specialists of the Labyrinth public group to study anomalous phenomena went to examine the wonder in the field. Local elderly women confirmed the large hole had appeared in the field indeed.

They said the hole had a perfect round shape, as if someone took a huge lump of ground with a cup. Local townsfolk built a fence around the hole not to let curious people and cows fall down in it.

The hole became a local place of interest: people come to see it and picnic nearby, others take photographs against its background. As it turned out, the pit was not round, but oval. It does not look like an excavator pit: there are no bucket tracks on its walls, nothing is seen on the meadow around either – the ground is even. The pit is smooth and vertical inside.

There is some water on the bottom of the 4,5-meter deep pit. Specialists of the above-mentioned Labyrinth group believe the hole probably appeared as a result of UFO’s activities: aliens landed their spaceship on the meadow to take ground samples.

However, ufologists failed to find any evidence to prove the landing of an extraterrestrial spacecraft. Ufologists also proposed the ground hole appeared as a result of a rare inexplicable natural phenomenon.