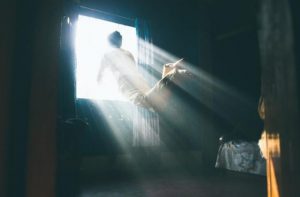 Mrs. Wilmot experienced an out of body experience and was seen by her husband and his cabin mate on a ship in stormy seas in 1863.

The OBE and Apparition

An OBE is an out of body experience, during which a person feels projected into distant places. This can happen spontaneously or consciously and has been studied by parapsychologists.

According to Rosemary Ellen Guiley, The Encyclopedia of Ghosts and Spirits (Facts on File Inc, 19920), S. R. Wilmot and his sister, Eliza, sailed from England to New York on the City of Limerick on October 3, 1863. Wilmot shared sleeping quarters with William J. Tait.

On the 4th, an intense storm began and would last for nine days. Wilmot was seasick and stayed in his berth for several days and nights. He was able to fall asleep on the eighth night, after the storm abated in its intensity.

Toward morning, he dreamed that he saw Mrs. Wilmot, his wife, wearing a white night gown, enter the room, notice Tate, then walk over and kiss her husband, caress him, then leave.

The next morning, Tait remarked that Wilmot had a lady visitor. Wilmot was perplexed and asked him he meant. Tait was awake when he saw Mrs. Wilmot enter the room and kiss and caress her husband before leaving. The description was exactly what Wilmot dreamt.

Tait asked Eliza was if she had been the one who walked into the room. She denied this.

When she saw her husband, Mrs. Wilmot asked him if he had a dream of her visiting on the eighth night of the storm. She knew about the bad weather and went out to search for him.

She felt she traveled across the raging waters, found the steamship, went to the stern and found the cabin. She hesitated when she saw Tait, but went over and kissed and caressed Wilmot. Her description of the room was accurate.

She told her mother about this the next day and said it was too vivid to be a dream and that she felt she had actually been on the ship.

Edmund Gurney, Richard Hodgson and Eleanor Sidgwick, members of the ASPR and highly respected psychical researchers of the time, interviewed the Wilmots and Eliza. Tait had died. The researchers came up with different theories to explain the incident.

Collective apparitions, those seen by more than one person, are not common. Less common are reciprocal ones in which the experient and agent see each other. This is further compounded by the fact that Wilmot was asleep when he saw his wife.

A possibility that was rejected was that Mrs. Wilmot projected herself to appear aboard the ship and Tait saw her double. At the time, OBEs were called astral projections, exteriorizations and astral travel.

To modern parapsychologists, the OBE explanation seems more likely and the telepathy/clairvoyance is too wieldy. Even today, parapsychologists differ on theories about OBEs and they consist of. The Wilmot case is one of the most intriguing ones.

A Quick View At Out of Body Experiences

Types of Intuition: How to Recognize Signs of Extrasensory Perception