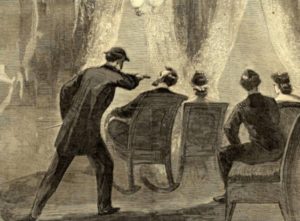 Major Henry Rathbone was the son of a successful and wealthy Albany businessman who made his fortune from the making and selling of stoves. His fiance, Clara Harris was the daughter of US Senator Ira Harris.

On the night of April 14 1865, the young couple were invited to join Lincoln’s party at Ford’s theater, and had seats in Lincolns box the night he was shot and killed by John Wilkes Booth.
The Major jumped up and tried to detain the assassin but Booth pulled a knife out and deeply slashed Rathbone’s arm, he then escaped by jumping to the stage.

The white satin dress Clara wore was splashed with both the blood of Lincoln and her fiance, staining it.

Following the traumatic event, Rathbone and Harris traveled back to Albany and were married, going on to have three children together. But witnessing Lincoln’s assassination appeared to taint their lives forever. Clara could not wear the stained dress again, but she also couldn’t bring herself to get rid of it either, even though, every time she saw it, the terrible memories of that that night flooded back. The shot that rang out, the splashed blood, her fiance’s valiant attempt to catch the murderer, the flash of Booth’s knife as it sank into Henry’s arm, her voice that demanded water for the president.

Even when the couple was preparing to sell their Albany home, Clara could not face getting rid of the gown. Her solution was to have the closet the dress was in sealed off with bricks.
Henry’s path after the assassination was one filled with a dark depression, which eventually manifested into a mental illness. The Rathbones in 1882 moved to Hanover, Germany a part of an ongoing quest to seek aid for Henry’s sad illness.

On December 23, 1883, a pale and unwell Rathbone, who had been complaining of constant headaches attacked his children in a fit of madness, resenting them for the attention they received off Clara. Rathbone had fatally shot and stabbed his wife, who was attempting to protect the children, and then stabbed himself five times in the chest in an attempted suicide. Rathbone however survived and was charged with murder but was declared insane by doctors after blaming the murder on an intruder. He was convicted and committed to an asylum for the criminally insane in Hildesheim, Germany.

He lived in constant fear the other inmates were conspiring against him, and died in this institution on August 14th 1911 at the age of 74. He was buried next to Clara who was 28 when he murdered her.

Back in Albany, at the Rathbone’s former home, with the bricked-up closet, witnesses reported a variety of strange happenings. A shot was heard ringing out on the anniversary of the assassination, people claimed to see the ghost of Abe Lincoln and a sobbing woman was seen wearing blood-soaked attire. These stories were so prevalent in Albany that in 1929, Mary Raymond Shipman Andrews wrote a story called The White Satin Dress based upon this haunting.

The Rathbone’s eldest son, Henry Riggs Rathbone was 13 years old when his mother was murdered. Clara’s brother then raised him and his younger brother and sister. He later became a US congressman, and was instrumental in the purchase of Osborn Oldroyd’s Abraham Lincoln memorabilia collection, that now reside in Fords Theater museum.

In 1910, just one year before his father’s death, Henry Rathbone broke down the bricks that enclosed his mother’s white satin dress, which had been worn 45 years earlier. He burned it, saying it had cursed his family.