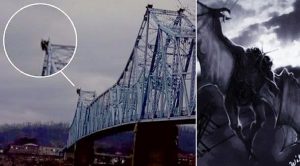 Most observers describe the Mothman as a winged man-sized creature with big reflective red eyes and large moth-like wings. The creature frequently showed up to have no head, with its eyes set into its chest. Many of hypotheses have been provided to explain eyewitness accounts, ranging from misidentification and coincidence, to paranormal phenomena and conspiracy theories.

Yet, for over a year in the mid 1960s more than 100 otherwise reliable residents of a small West Virginian town distinctly noticed the horrifying figure that terrorised their community. They saw ‘Mothman’. In early November 1966 various sightings of a huge, strange ‘bird’ were reported around Point Pleasant, West Virginia, USA.

On 12th November, five gravediggers preparing a plot reported seeing a ‘brown human being’ take to the air from some nearby trees and pass over their heads. It was not until three days later that the creature really terrified the community with a close encounter.

On 15th November, two young couples were driving together near the McClintic Wildlife Preserve, just outside Point Pleasant. The area was known to locals as ‘TNT’, because it had been used as an explosives depot during the Second World War and there were many abandoned chemical and industrial plants in the vicinity.

Late in the evening, the two couples approached an old generator plant and saw that its door appeared to have been ripped off. It was then that they noticed two huge red eyes shining out of the gloom at them. These hypnotic, staring discs were attached to what they said was ‘shaped like a man, but bigger, maybe six or seven feet tall.

And it had big wings folded against its back’. As the creature approached, the young group sped off, but as they looked back they saw it take to the air, rising straight up without flapping its wings. It had a giant 10- foot wingspan, and kept pace with the car despite the vehicle reaching speeds of 100 miles an hour.

Eventually the group reached the Point Pleasant city limits, where their aerial pursuer turned away and disappeared. The couples drove straight to the local police station and reported what they had seen. Although local police found nothing at TNT, they accepted the young people had seen something. 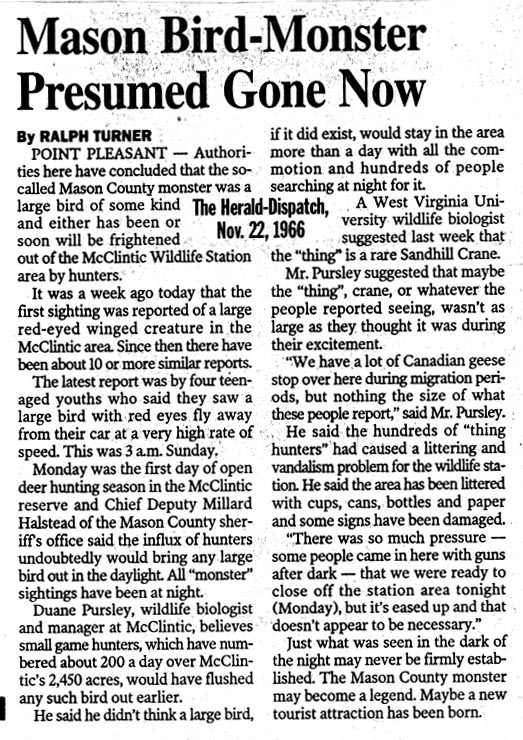 Over the next few days reports of a giant ‘bird’ terrorising locals came into police headquarters with increasing frequency. Car passengers had experienced the creature swooping down on them, and the reception on television and radio sets were being disrupted across the region.

One man whose television failed lived in Salom, 90 miles from Point Pleasant. At the exact moment his television stopped working, his dog whined from the porch. The man went outside to investigate and spotted two red, glowing lights in his hay barn, at which point his dog ran off.

The man, stricken with fear, returned to his house, locked all the doors and windows. That night, he slept with his gun next to him. His dog was never seen again.

Perhaps the most chilling story concerning Mothman happened on 16th November 1966. A young mother was driving to see some friends, who had one of the few houses close to the TNT compound. She said she had seen a ‘funny red light’ in the sky, and, as she arrived at her friends’ house, heard something rustling near her car. ‘It seemed as though it had been lying down.

It rose up slowly from the ground. A big grey thing. Bigger than a man, with terrible glowing eyes,’ she said. Horrified, she grabbed her small daughter and ran into the house, locking the doors behind her. The creature followed, creeping onto the porch and staring in the windows. The police were called, but by the time they arrived, Mothman had disappeared.

Over the next year, Mothman was seen by many witnesses including firemen and pilots. Gradually the reports altered into cases of UFOs, strange lights and ‘Men in Black’. At 17.00 on 15th December 1967 the Silver Bridge linking Point Pleasant to Ohio suddenly collapsed, 46 people died as a result, and the residents of Point Pleasant were forced to deal with real horror rather than mythical beasts.

A large collection of first-hand material about the Mothman is found in John Keel’s 1975 book The Mothman Prophecies, in which Keel lays out the chronology of the Mothman and what he claims to be related parapsychological events in the area, including UFO activity, Men in Black encounters, poltergeist activity, Bigfoot and black panther sightings, animal and human mutilations, precognitions by witnesses, and the December 15, 1967 collapse of the Silver Bridge spanning the Ohio River.

Keel’s first book was the basis of a 2002 film, The Mothman Prophecies, starring Richard Gere, Laura Linney, Debra Messing and Will Patton, directed by Mark Pellington. A companion book called The Eighth Tower, also released in 1975, was derived from material edited from The Mothman Prophecies by the publishers.

In the May-June 2002 issue of the Skeptical Inquirer, journalist John C. Sherwood, a former business associate of UFO hoaxer Gray Barker, published an analysis of private letters between Keel and Barker during the period of Keel’s investigation.

In the article, “Gray Barker’s Book of Bunk”, Sherwood reported finding significant differences between what Keel wrote at the time of his investigation and what he wrote in his first book about the Mothman reports, raising questions about the book’s accuracy.

Even though Sherwood had reported that Keel would not assist him in clarifying the differences, a simple analysis of Keel’s earliest Mothman book, Strange Mutants: Demon Dogs and Phantom Cats (1970) shows almost no difference with what Keel wrote in The Mothman Prophecies five years later.

Their creature’s reign of terror paled into insignificance and he was forgotten. However, many people still believe the bridge disaster may have been Mothman’s terrible final act.

The Unusual Grave With A Window Of Dr. Timothy Clark Smith