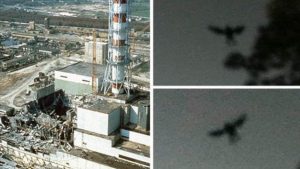 A bizarre event occurred before the accident at the Chernobyl nuclear power plant. The station staff saw a strange creature in the sky and after that they were tormented by nightmares for a long time.

The Russian journalist interviewed the archeologist Robert Musquell from Sydney, who had been in the exclusion zone several times. It was on the territory of the accident that Robert first heard the story of the “Chernobyl Thrush” as an omen of something terrible.

The eerie creature appeared in the sky on April 26, 1986. As the archaeologist noted, the bird described by the station workers reminded him of the story of Mothman.

Something like this has been seen in Point Pleasant (West Virginia) since the 1960s. Mothman’s observation stories stopped only on December 15, 1967, when the Silver Bridge collapsed.